What to Know About Donald Trump Jr.'s New Lawyer

Donald Trump, Jr., the embattled son of President Donald Trump, has retained a lawyer amid controversy over his meeting with a Kremlin-linked attorney who reportedly promised damaging information about Hillary Clinton, his father’s onetime electoral rival.

In the latest twist in the saga, Trump Jr. published a series of emails Tuesday showing that he was told the Russian attorney was acting as part of the Kremlin’s “support” for Trump. “The information they suggested they had about Hillary Clinton I thought was political opposition research,” Trump Jr. said in a statement accompanying the release.

Trump Jr.’s lawyer, Alan Futerfas, is a New York City attorney best known for defending alleged members of the mob and white-collar criminal suspects. Hiring Futerfas makes the eldest Trump the eighth associate of President Trump to retain an independent attorney, according to the Washington Post.

Here’s what you should know about Futerfas as the Trump Jr. situation continues to unfold.

Who is Alan Futerfas?

Futerfas is a New York City attorney with over two decades of experience in criminal defense, according to his law firm biography. He runs his own firm, which he opened in 1994. He has been listed as a New York “Super Lawyer” for the last four years.

Futerfas is also a musician who attended the Juilliard School and is currently a bass-trombonist for the Park Avenue Chamber Symphony.

Who has Futerfas defended?

One of Futerfas’s most well-known cases occurred nearly 20 years ago when he won a new trial for mob leader Anthony Russo. The case hinged on a revelation that a Federal Bureau of Investigations agent may have intentionally leaked information to trigger an organized crime war, Reuters reports. Futeras has also defended other members of the Colombo family, according to the New York Times.

In 2000, Futerfas argued successfully before the Supreme Court in Artuz v. Bennet. That case involved a man who fired on police officers and was convicted of attempted murder, but who was denied a habeas corpus petition. The second court of appeals reversed the decision to deny that petition, and the Supreme Court upheld the reversal.

Futerfas’ more recent clients include Ziv Orenstein, an Israeli citizen charged in connection with a 2014 hacking of J.P. Morgan Chase. In 2013, Futerfas represented hedge fund adviser Ezra Zask, who pleaded guilty to possessing child pornography but was put on probation rather than face jail time.

Does Futerfas have a connection to President Trump or Donald Trump Jr.?

Futerfas told the Washington Post on Monday that he had only recently met Trump Jr. and had never met the President. “You meet someone and they vet you a little bit, find out what your thoughts are and how you would approach things. And that’s what happened here,” he told the newspaper. Futerfas did not respond to TIME’s requests for additional comment.

Reuters reports that when Futerfas was in law school, he worked with Jay Goldberg, a lawyer who later served as a divorce attorney for President Donald Trump. But Futerfas told Reuters that the Goldberg connection played no role in Trump Jr. retaining his services.

Futerfas did not financially back the elder Trump’s Presidential bid, according to campaign finance records. In fact, he has a history of donating to Democratic candidates, including over $1,500 to Hillary Clinton in 2016 and over $1,200 to Barack Obama in 2012. Since November 2016, he has donated $1,200 to Emily’s List, a group that works to elect pro-choice Democratic women to Congress. 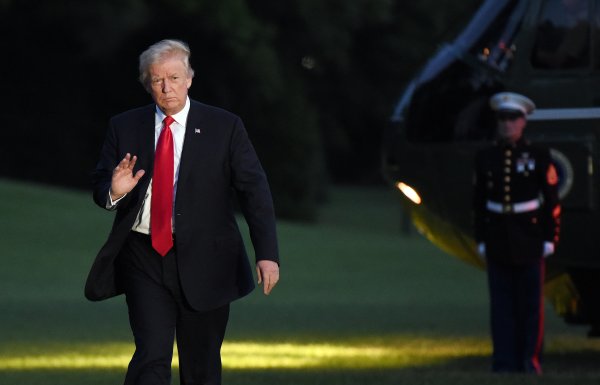 President Trump Won't Visit the U.K. This Year Because of a 'Scheduling Issue'
Next Up: Editor's Pick