President Donald Trump’s son publicly released copies of emails Tuesday showing he was informed that a Kremlin-linked lawyer offering negative information on Hillary Clinton was acting as part of the Russian government’s “support” for Trump.

“If it’s what you say I love it especially later in the summer,” Donald Trump, Jr. wrote at the offer of assistance.

The email chain released by Trump Jr., who took the June 2016 meeting with Natalia Veselnitskaya, shows that the younger Trump was promised “very high level and sensitive information but is part of Russia and its government’s support for Mr. Trump.”

The information confirms a New York Times report Monday night about the emails. The meeting was only disclosed Saturday after sources detailed to the Times the contents of updated disclosures from Trump son-in-law Jared Kushner and former campaign chairman Paul Manafort, who were also in the meeting and included on the email chain. Trump Jr. posted the emails minutes before they were set to be released by the Times.

Donald Trump, Jr. initially stated that the meeting was primarily related to Russian adoption issues, but was forced to concede Sunday he had been promised negative information about Clinton.

In a statement Tuesday, the younger Trump maintained that nothing came from the meeting, but seemingly confirmed that he was open to obtaining negative information about his father’s Democratic political rival from the Russian government.

“The information they suggested they had about Hillary Clinton I thought was Political Opposition Research,” Trump said. “I first wanted to just have a phone call but when that didn’t work out, they said the woman would be in New York and asked if I would meet. I decided to take the meeting. The woman, as she has said publicly, was not a government official. And, as we have said, she had no information to provide and wanted to talk about adoption policy and the Magnitsky Act. To put this in context, this occurred before the current Russian fever was in vogue.”

In an email from Rob Goldstone, a music promoter who represents Emin Agalarov—the man who arranged Trump’s meeting with Veselnitskaya and the son of Russian billionaire and Putin confidant Aras Agalarov—lays out the offer of Russian assistance to the Trump campaign.

“The Crown prosecutor of Russia met with his father Aras this morning and in their meeting offered to provide the Trump campaign with some official documents and information that would incriminate Hillary and her dealings with Russia and would be very useful to your father. This is obviously very high level and sensitive information but is part of Russia and its government’s support for Mr. Trump — helped along by Aras and Emin. What do you think is the best way to handle this information and would you be able to speak to Emin about it directly? I can also send this info to your father via [longtime Trump executive assistant Rhona Graff], but it is ultra sensitive so wanted to send to you first.”

President Trump was not in attendance at the meeting and was only made aware of it in recent days, the White House said.

On July 24, 2016, just weeks after meeting with Veselnitskaya, Donald Trump Jr. addressed claims that the Russian government was trying to help his father’s campaign. “It’s disgusting. It’s so phony,” he told CNN. 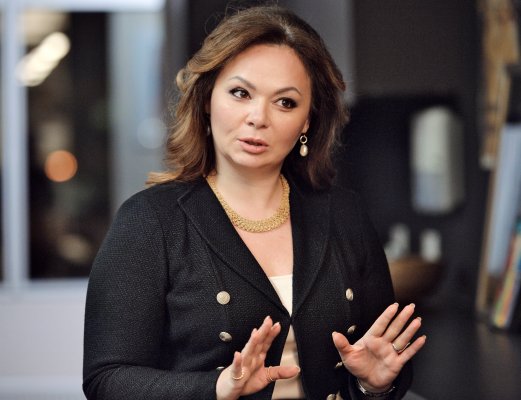 Russian Lawyer: I Never Had Damaging Info on Hillary Clinton
Next Up: Editor's Pick