Reports of the death of Islamic State leader Abu Bakr al-Baghdadi have, until now, turned out to have been greatly exaggerated. But a new claim by a prominent Syrian human rights group has analysts wondering if the world’s most wanted jihadist leader might finally be gone.

The U.K.-based Syrian Observatory For Human Rights said in a statement that three ISIS leaders told the group’s activists that Baghdadi was dead, but did not specify how he had died. According to the officials, Baghdadi had been located in Syria’s Deir al-Zour province, near the border with Iraq, the statement added. The group identified one of its sources as a member of ISIS’ top ranks, while the two others were from the second tier of leadership.

Baghdadi’s demise has been reported, with no discernable evidence, numerous times in recent years. His death has now been claimed at least three separate times in the last two months. In June, Russia’s Defense Ministry said it was investigating whether one of its airstrikes had killed the ISIS leader, a claim that was widely dismissed as Russia has made baseless claims about killing ISIS leaders in the past.

But the Syrian Observatory’s claim included more specifics than previous reports of Baghdadi’s death, and the group is considered a more reliable source than others — its reports about events in Syria are frequently cited by international news organizations. As of Tuesday evening, however, there was simply no confirmation of the report. Baghdadi was last seen in public in June 2014 when he delivered a landmark sermon at the Nouri mosque in the Iraqi city of Mosul, proclaiming victory after ISIS fighters overran the city.

ISIS’ propaganda arm made no immediate comment on the report. In the past, the group has officially confirmed the deaths of top leaders. If confirmed, Baghdadi’s death would mark a milestone in the war on the Islamic State, which seized huge parts of Iraq and Syria in 2014.

American military officials said they could not confirm the claim. A spokesperson in Baghdad for the U.S.-led military coalition fighting ISIS said, in an email to TIME, “We cannot confirm this report, but hope it is true. We strongly advise ISIS to implement a strong line of succession, it will be needed.”

If Baghdadi were to be killed, the world governments battling ISIS and its affiliates would claim his death as a victory in the struggle against the extremist group, which now claims branches as far away as Afghanistan and the Philippines. “The bigger picture here is that, at this point we have a ‘they said, and the other party hasn’t said anything’ situation,” said Michael S. Smith, the founder of a counterterrorism consultancy that has advised the U.S. government.

“I assess that Baghdadi’s death would have a negligible impact on [ISIS], because, since 2014, the group has been conveying to acquired and prospective supporters they should expect for the senior leadership to be targeted and killed,” he told TIME.

The report comes days after a major turning point in the broader fight to dislodge ISIS from its self-proclaimed “caliphate” as Iraqi Prime Minister Haider al-Abadi declared victory on Sunday over the group in Mosul, the largest city once captured by the group. Backed by American airstrikes, Iraqi forces battled for nine months to liberate the city of more than a million people, reversing ISIS’ lighting capture of the city in June 2014.

In the past ISIS has confirmed the deaths of its leaders, claiming them as “martyrs” for the group’s cause. In August 2016, the organization’s chief strategist and propagandist, Abu Muhammad al-Adnani was killed in a claimed U.S. airstrike in in Syria, resulting in a proclamation of his martyrdom.

The man now known as Abu Bakr Baghdadi was born in 1971 with the name Ibrahim Awwad Ibrahim al-Badri, near the Iraqi city of Sammara. A member of a family of pious Muslims, he would go on to earn a master’s degree in Quranic recitation in 1999 from an Islamic university established under the regime of Saddam Hussein. Badri joined the insurgency against the U.S. occupation of Iraq in 2003, and was detained in 2004 at Camp Bucca, a vast prison camp set up by the American military for suspected insurgents.

He went on to join al-Qaeda’s affiliate in Iraq, which later transformed into ISIS. He led the group as it capitalized on the chaos in the aftermath of the Syrian popular uprising of 2011, claiming a huge stretch of territory in both Iraq and Syria. He presided over the group as it proclaimed the return of the caliphate, claiming the lineage of the early Islamic empires. The self-declared Islamic State reached its pinnacle after sweeping into Mosul in June 2014, overtaking one of Iraq’s largest cities in a matter of days.

In recent years, Baghdadi is believed to have been driven deep underground. His voice was last heard in November 2016 when ISIS released an audio recording that it claimed was his voice delivering a message in response to the launch of Iraqi forces’ military assault on Mosul. 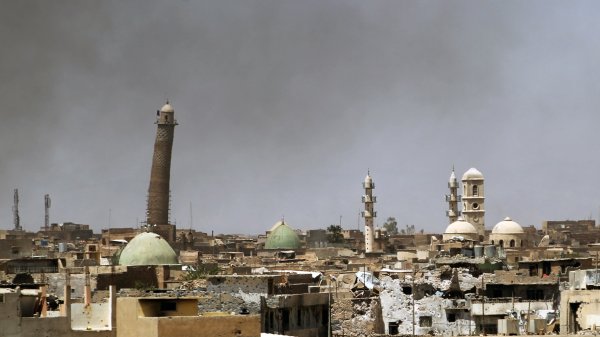 What the Destruction of the Mosul Mosque Shows About ISIS
Next Up: Editor's Pick