But the younger Trump has since admitted that he was not saying everything he knew at the time. Weeks earlier, Trump had met with a Russian lawyer with ties to Kremlin, Natalia Veselnitskaya, who had promised she “might have information helpful to the campaign,” according to a statement released Monday by the younger Trump’s attorney, Alan Futerfas. The New York Times reported hours later that Trump Jr. was told in an email that the Russian government was the source of the information Veselnitskaya would present.

The new revelations fit a pattern that has dogged President Donald Trump and his aides through the first months of their administration. Time and again, those close to the President, and the President himself, have had to change their stories about their proximity to Russian officials during the election campaign and shortly afterwards, as new contradictory information comes to light.

“Did I meet with people that were Russian? I’m sure, I’m sure I did,” Donald Trump Jr. told the Times in March. “But none that were set up. None that I can think of at the moment. And certainly none that I was representing the campaign in any way, shape or form.” He now says he invited both the campaign manager, Paul Manafort, and another top campaign aide, Jared Kushner, to sit in on the meeting with Veselnitskaya knowing they would discuss information about the Clinton campaign.

This directly contradicts the claims of several senior Trump aides that this sort of contact never took place. “There was no communication between the campaign and any foreign entity during the campaign,” said Trump spokeswoman Hope Hicks shortly after the November election last year. “Of course not. Why would there be any contacts?” said Vice President Mike Pence on January 15, when asked on Fox News if there were any contacts between “Trump or his associates and the Kremlin or cutouts.”

Inside the Trump administration, there appears to have been little internal efforts to fact check these denials before they were made. The latest meeting with Trump Jr. was uncovered only after Kushner and Manafort disclosed the meeting to investigators looking into potential collusion on the part of the Trump campaign with Russian agents. After first saying the meeting only regarded a block on Russian adoptions, the younger Trump admitted 24 hours later it had a different purpose. “Obviously I’m the first person on a campaign to ever take a meeting to hear info about an opponent,” Trump tweeted Monday, trying to explain away the controversy. “Went nowhere but had to listen.”

The assertion that it was an innocuous meeting would be easier to accept had it not followed on more than a half-dozen similar revelations in recent months that contradicted previous denials of Russian contact with Trump’s circle. Kushner, Attorney General Jeff Sessions, and former National Security Advisor Mike Flynn were all forced to acknowledge previously undisclosed contacts with Russian Ambassador Sergey Kislyak. Flynn’s discussions with Kislyak about sanctions ultimately cost him his job, after he misled Vice President Mike Pence about the nature of his conversations. Sessions’ contacts forced his recusal from overseeing the ongoing Russia investigation.

Trump himself has been the source of much of the confusing talk about Russia, denying meetings only to be proven wrong and misstating even his own communications with Russian leaders in recent days. Trump met with Russian President Vladimir Putin on Friday. Secretary of State Rex Tillerson recounted a day later that the men discussed U.S. sanctions on Russia. Less than 24 hours later, the President tweeted, “Sanctions were not discussed at my meeting with President Putin.”

On Monday, White House Principal Deputy Press Secretary Sarah Sanders restated, without explaining Trump’s tweet, “There were sanctions specific to election meddling that were discussed.” The president also said he discussed forming a joint “impenetrable cyber security unit” with Putin to protect elections. He walked back the half-baked plan hours later, but not before Treasury Secretary Steven Mnuchin hailed it as a “strategic alliance” and a “very significant accomplishment for President Trump.”

Even White House allies have been exasperated by the constantly shifting narratives on Russia and the steady revelations that have kept the firestorm alive. Some have expressed frustration that the White House has not had a better way to get ahead of the story. White House officials claim the revision and correction of past stories about Russia contact stems from Trump’s own sensitivity to the issue, and his worry that the Russian investigation undermines his legitimacy.

The persistence of the confusion is colored by the fact that it took Trump months to publicly accept the conclusions of the U.S. intelligence community that Russia was behind election-related hacks in 2016. Shortly after the election, he rejected those conclusions as politically motivated in an interview with TIME. ““I don’t believe it. I don’t believe they interfered,” he said, when asked about the conclusion that Russia was involved in stealing emails from the Democratic National Committee.

Trump has never publicly affirmed the intelligence community’s assessment that it was part of an operation to assist his campaign—despite multiple briefings on the subject. As recently as last week in Poland, Trump gave a jumbled answer to a question about whether Russia was responsible for interfering in the 2016 election. “I think it was Russia. And I think it could have been other people and other countries. It could have been a lot of people that interfered,” he said. “Nobody really knows for sure.”

One day later, the White House aides said Trump raised the issue of hacking with Putin “multiple times,” with the Russian leader later telling reporters he believed his answers “satisfied” the American President. “Look, he heard Putin’s denial and he knew that at the end of the day the important part was them being able to have that conversation, him to directly ask him,” Sanders said Monday. “He heard his answer and he moved forward with places that they thought they could work together.” 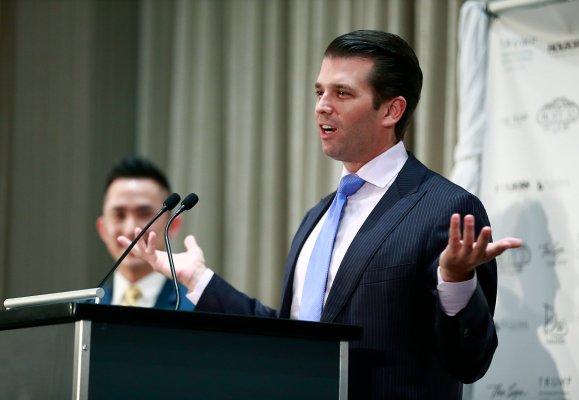 Trump Jr. Knew of Moscow Involvement in Lawyer Meeting
Next Up: Editor's Pick