What's Next for Mosul After It Was Liberated From ISIS

Iraqi Prime Minister Haider al-Abadi has announced that Mosul is officially free from ISIS, despite a few dozen militants making a last stand. The sound of gunfire rang out from the Old City Monday and plumes of smoke rose above the historic structures. ISIS militants have vowed to fight to the death in the few streets they still control.

It took ISIS just days to take Mosul in June of 2014, but it has taken Iraqi forces more than eight months of hard fighting to win it back. That fight, backed by militia and heavy air strikes by the US-led coalition, has left Mosul in ruins and done little to repair the sectarian tension among Iraqis.

Iraq’s army and police now control most streets of the country’s second largest city, along with militia fighters. They hold their weapons next piles of rubble and bent metal that were once Mosul’s homes, shops, institutions and government buildings. Most of the structures still standing are littered with bullet and mortar holes. The bridges that use to connect the east and west sides of the city, over the Tigris River, are destroyed.

The United Nations warned Monday that an end of fighting in the city would not relieve the humanitarian crisis in the country. The organization says it will take billions of dollars and years to rebuild the city. Until then, most of nearly 1 million civilians displaced by the fighting will languish in camps in northern Iraq.

Those that remain in the city complain of a lack of water and electricity, even in areas reclaimed months ago. Today, men and boys gathered around a water tap in eastern Mosul washing their faces and filling buckets to take home.

“There’s no water, no electricity and no work,” says Taha Mohammed Ibrahim. The fighting has damaged much of the city infrastructure and while many shops and markets have reopened many more have not. Ibrahim says that every few days city water does arrive in his home, but the smell is so bad his family doesn’t use it.

Posters celebrating the army’s defeat of ISIS line the streets of eastern Mosul. Another reads: “Mosul is the city of peaceful coexistence.”

Like many here, Ibrahim is happy the government is back in control, after years under the ISIS militants. But he’s worried about a return to the sort the oppression many Sunni residents felt under Baghdad’s rule before ISIS came.

“We would queue for hours at checkpoints,” says Ibrahim. “[Security forces] would just arrest innocent people.”

At screening center nearby families arrive from Mosul’s Old City. Men and older boys are separated from women and children. They are questioned and two men on laptops checked their names against a database of those wanted by security forces.

“Ninety percent of these people are ISIS families,” says Lieutenant Colonel Jabbar Mustafa, who is in charge of the center. Those believed to be ISIS are sent to a prison in a nearby town, and the rest transferred to packed displacement camps. Human rights groups have accused security forces of torture and arbitrary detentions in centers like these, though Mustafa denies that.

The resentment of the Shia-led government in Baghdad, that facilitated ISIS’ quick advance across Iraq in 2014, still festers. Many Sunnis in Mosul, and the surrounding villages welcomed ISIS three years ago, describing Iraqi forces’ presence like an occupation of the city.

Rebuilding Mosul will be expensive, but rebuilding trust among Iraqis will be even more difficult. Sunni leaders say little has been done to address the grievances of their community.

“We need to start a new page where the Sunnis will be real participants in the political process,” says Intisar Al-Jabbouri, a member of the Iraqi parliament from Mosul. “[They] need to be seen as equal citizens of Iraq and not as second degree citizens.”

Jabbouri says the government must to work to rebuild the trust and co-existence that she says they once had in Mosul and national reconciliation is key. But that hasn’t been a priority as Iraqi forces fought hard to push ISIS out the country’s cities and villages.

“It needs time and a big effort,” she says. “But if that doesn’t happen it may lead to a civil war.” 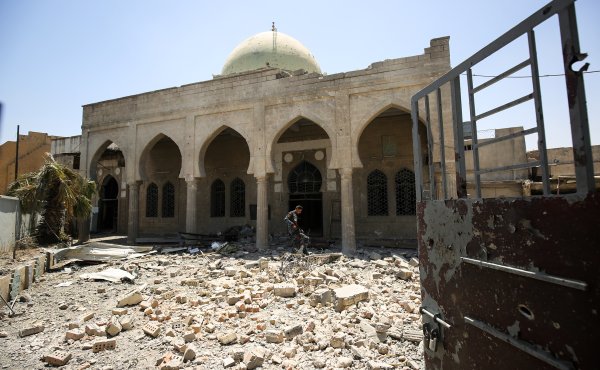 Iraqi Prime Minister Says End is Nigh for 'Fake' Islamic State
Next Up: Editor's Pick