Firefighters save an American flag as impending flames from the Wall Fire close in on a luxury home in Oroville, Calif., on July 8, 2017.
Josh Edelson—AFP/Getty Images
By Jennifer Calfas

The picture didn’t focus on the encroaching flames in Oroville, Calif., which have burned through 5,600 acres and destroyed 17 structures as of Monday. Instead, Edelson recorded something unexpected. His photograph, above, shows a trio of firefighters saving an American flag from a home in peril as nearby flames cast an ominous orange glow on the scene.

The three firefighters in Edelson’s image are from the California Department of Forestry and Fire Protection, or Cal Fire. In contrast to the grim nature of their environment, two are smiling as they lift the third to grab the flag.

“It was a happy oasis that happened in a desert of tragedy,” says Edelson, who made the image Saturday evening while decked out in full fireman-style gear and carrying two cameras. “I’ve never seen anything like that,” he added. “I’ve seen burnt flags before, but I’ve never seen a flag rescued.”

Just before making the photograph, Edelson spotted the firefighters building containment lines around the house. As they finished, Edelson says, they made a snap decision to save the flag. “It seemed more like a symbolic effort to protect the flag,” says Edelson. “It was a really nice moment.”

One of the firefighters who removed the flag did not immediately respond to a request for comment.

Edelson, who lives in Mill Valley just north of San Francisco, was told the home was spared, though he isn’t sure where the flag now resides. The photographer added that it wasn’t until after he made the photos that he realized the symbolism within, echoing famous photographs from Raising the Flag on Iwo Jima to Raising the Flag at Ground Zero. But whereas those images recorded a flag being raised, this one captures a flag — and possibly a home — being saved.

Edelson, who does corporate photography in addition to photojournalism, has covered about a dozen fires over the past several years. During wildfire season, he tracks the blazes closely to monitor if one will escalate. And he has a particular reverence for the firefighters risking life and limb to save others and their property.

“There’s kind of a culture up there, and a lot of the bonds these firefighters have being up there is through the adverse conditions that they face,” says Edelson. “The whole thing is symbolic, every time they pick up a hose and spray down a spot fire. It’s fully heroes in action.” 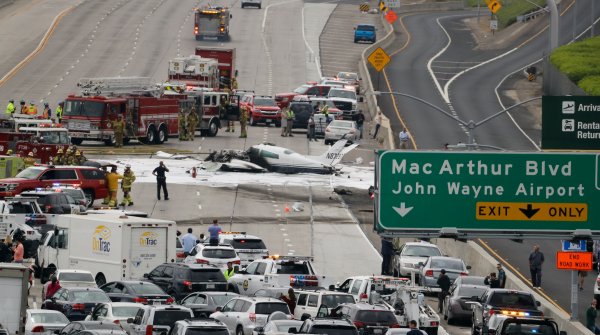 See the Aftermath of a Plane Crash on California's 405 Freeway
Next Up: Editor's Pick