With less than a week to go until Game of Thrones‘ long-awaited seventh season, discussion about who deserves the Iron Throne is heating up. But while some fans believe Sansa Stark should be the one to end up on Westeros’ highest seat of power, Sophie Turner — who plays the elder Stark daughter — has a different opinion.

During an interview with Entertainment Weekly alongside co-stars Kit Harington (Jon Snow), Maisie Williams (Arya Stark) and Isaac Hempstead-Wright (Bran Stark), Turner revealed that she believes Sansa would be content to take control of the North while her half-brother-turned-cousin ascends to the Throne.

“I think the Stark that should rule Winterfell is Sansa because she deserves it and she’s a natural born leader,” she said. “But I don’t think she really wants the Iron Throne at all. Winterfell is just perfect for her. Jon Snow should be on the Iron Throne out of all the Starks. He’s kind of got the whole package and has a great team around him. I think he’d be quite a good king.”

However, her onscreen siblings disagreed, all putting in a good word for their red-headed sister. “Sansa [should] rule the Iron Throne, Arya rule Winterfell and I’d have Jon Snow go back to the Wall,” Harington offered. 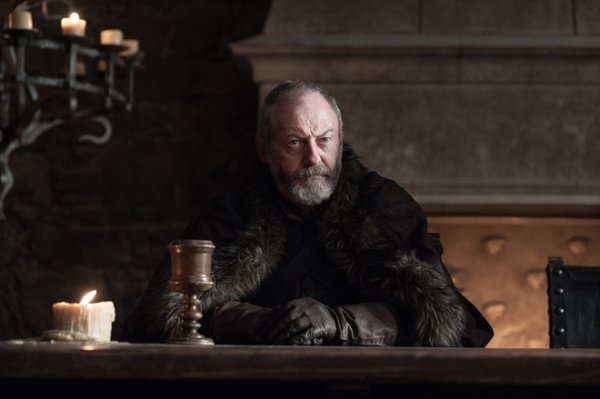 The Game of Thrones Cast Is Overflowing With Spinoff Suggestions Like 'Better Call Davos'
Next Up: Editor's Pick