Donald Trump Jr. addressed his recently disclosed meeting with a Russian lawyer who has links to the Kremlin in a tweet early Monday, claiming the conversation “went nowhere,” but he “had to listen.”

“Obviously I’m the first person on a campaign to ever take a meeting to hear info about an opponent…,” Trump tweeted. “Went nowhere but had to listen.”

The New York Times first reported that Trump Jr., the President’s son-in-law Jared Kushner, and former Trump campaign chairman Paul Manafort met with Russian lawyer Natalia Veselnitskaya last June amid the 2016 election. Veselnitskaya reportedly promised to offer information that would be damaging to the Clinton campaign. Donald Trump Jr. confirmed that he took the meeting on Sunday, saying that he met with the lawyer at the request of an acquaintance from the 2013 Miss Universe pageant, which was held in Moscow.

The Washington Post identified publicist Rob Goldstone as the acquaintance who set up the meeting between Donald Trump Jr. and Natalia Veselnitskaya. Goldstone said in a statement the request for the meeting came from his client, Emin Agalarov. “Nothing came of that meeting and there was no follow up between the parties,” Goldstone said.

Trump’s tweet included a New York Post story that dismissed the report on his Russia meeting as a “big yawn.”

White House counselor Kellyanne Conway appeared on Good Morning America on Monday, where she said that “no information was received that was meaningful or helpful and no action was taken,” as a result of the meeting. When asked why the meeting was not initially disclosed, Conway said disclosure statements had been amended to reflect the meeting. 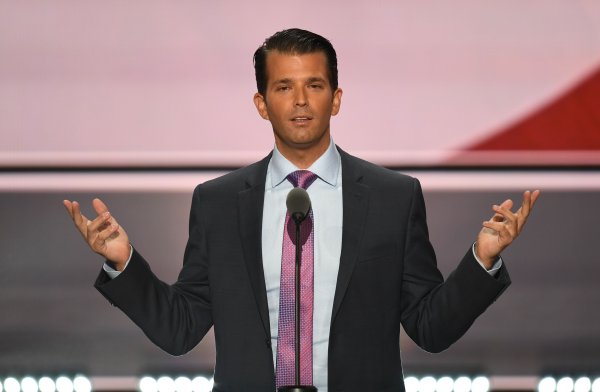 Trump Jr. Met With Russian Lawyer Before Election
Next Up: Editor's Pick