President Donald Trump is dismissing complaints about his daughter and White House aide Ivanka Trump filling his seat in a meeting with world leaders at the G20 summit on Saturday.

“When I left Conference Room for short meetings with Japan and other countries, I asked Ivanka to hold seat. Very standard. Angela M agrees!” Trump tweeted early Monday, referencing statements German Chancellor Angela Merkel made at a press conference at the close of the summit.

“The delegations decide who will sit at the table if the President isn’t there, which can happen from time to time. And Ivanka belongs to the U.S. delegation,” Merkel said, according to a Reuters report. “It’s well known that she works in the White House and is responsible for several initiatives.”

Ivanka’s seating at the meeting of world leaders drew sharp criticism online. Typically, a secretary of state, foreign minister, or other senior official would fill in for a leader at the summit. A European official told the Washington Post that her appearance “stuck out.” The official added, “The very fact that his daughter is senior adviser smacks of the kind of nepotism not seen since John F. Kennedy named Robert F. Kennedy as Attorney General.”

Others took to Twitter to condemn Ivanka Trump’s appearance, calling her “unelected and unqualified” and joking that the G20 is not “take your daughter to work day.”

Ivanka didn’t just serve as a seat-filler during the summit. She also joined World Bank leaders to launch a public-private loan program designed to help female entrepreneurs in developing countries. President Trump praised Ivanka during the summit, saying that the only “bad thing” she has going for her may be the fact that she’s his daughter.

On Monday, Trump tweeted that if his former opponent Hillary Clinton had tapped her daughter to fill in for her at the summit, the reaction would be different. “If Chelsea Clinton were asked to hold the seat for her mother,” he tweeted, “the Fake News would say CHELSEA FOR PRES!”

That tweet prompted a response from Chelsea Clinton, who wrote, “Good morning Mr. President. It would never have occurred to my mother or my father to ask me. Were you giving our country away? Hoping not.” 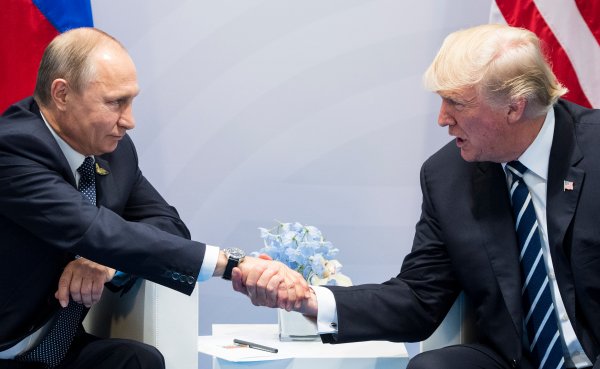 President Trump Met Vladimir Putin For the First Time. Here's What a Body Language Expert Saw
Next Up: Editor's Pick