Japanese Prime Minister Shinzo Abe will reshuffle his cabinet and party leaders early next month, moving to shore up his worst levels of popular support since returning to power in 2012, following a historic loss in a Tokyo assembly election.

Last week’s loss, delivered by a novice political group, spotlights Abe’s potential vulnerability after nearly five years in power, with many blaming voter perceptions of arrogance on his part and that of his powerful Chief Cabinet Secretary, Yoshihide Suga.

Opinion polls on Monday showed Abe’s popularity at its lowest since he returned to power late in 2012, with support of 36% in one conducted by the conservative Yomiuri Shimbun newspaper – tumbling from 49% a month earlier.

Another, in the liberal Asahi, found support of 33%, a slide from 38% from a week earlier.

Abe, in Europe for a summit of leaders of the G20 grouping of nations, told traveling media he would retain core officials in the reshuffle of the cabinet and ruling Liberal Democratic Party (LDP) officials planned for August.

Read More: Do Stressed-Out Japanese Really Stage Elaborate Disappearances? On the Trail of the Johatsu or ‘Evaporated People’

“I will reshuffle the LDP leadership and the Cabinet members early next month, aiming to renew peoples’ feelings,” Jiji news agency quoted Abe as saying in Stockholm.

“Stability is extremely important to deliver results. The core structure of the Cabinet should not be changed so often.”

He also said he would skip a planned visit to Estonia and would arrive back in Japan a day early to visit the flood-devastated southwest.

Exactly a year ago, Abe’s ruling bloc stormed to a landslide victory in an election for parliament’s upper house, despite concerns over his economic policies and plans to revise the nation’s postwar constitution.

His administration has since been battered by a scandal over suspicions of favoritism to a friend’s business, verbal gaffes by cabinet ministers and concerns about Abe’s intentions to revise the constitution.

He faced another challenge on Monday, when former vice education minister Kihei Maekawa testified to parliamentary panels on concerns Abe may have intervened to help win approval for a veterinary school run by an education group whose director, Kotaro Kake, is a friend.

Abe has repeatedly denied doing Kake any favors but the panels were set up even though parliament is in recess.

On July 2, Tokyo Governor Yuriko Koike’s novice Tokyo Citizens First party and its allies – including the LDP’s national coalition partner – won a landslide victory in the assembly election, taking 79 of the 127 seats up for grabs.

The LDP got 23 seats, its worst ever result in the capital and less than half its pre-vote tally. 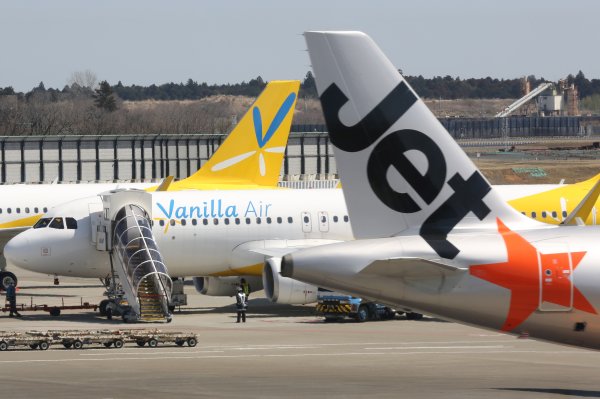 Japanese Airline Forced Disabled Passenger to Crawl On Board
Next Up: Editor's Pick