President Donald Trump unleashed a series of tweets about his two-hour-long July 7 meeting with Russian President Vladimir Putin Sunday claiming the latter “vehemently denied” any efforts by his country to interfere in the U.S. election, and that the two want to work together on a cyber security initiative to prevent any future election hacking.

The President said he “strongly” pressed the Russian leader twice about election hacking, but declined to definitively say, at least in his tweets, if he accepted this denial. “You know my opinion,” he wrote on Twitter.

The day before Trump met with Putin, he acknowledged the possibility of Russian interference in the election, but said other countries could have been responsible as well.

“I think it was Russia, and it could have been other people in other countries,” he said in Warsaw, Poland, on July 6.

But this opinion is a divergence from U.S. intelligence agencies, which released a report on January 6 maintaining that Putin “ordered an influence campaign in 2016 aimed at the US presidential election,” and had a clear preference for Trump.

“There’s not anybody that thinks that Russia didn’t meddle in the elections,” Nikki Haley, Trump’s U.N. Ambassador, said on Face the Nation Sunday. “And I think we all are very clear on that. And I think we’re going to see what Congress does and I think the president will continue to work on this going forward, but yes, I don’t think this is over.”

Trump’s Chief of Staff Reince Priebus however, said on Fox News Sunday that Trump “absolutely” did not believe Putin’s denial. “His answer to this question many times is they [Russia] probably meddled in the election,” he said. “The one thing he also says, which drives the media crazy but its an absolute fact, is others have as well.” 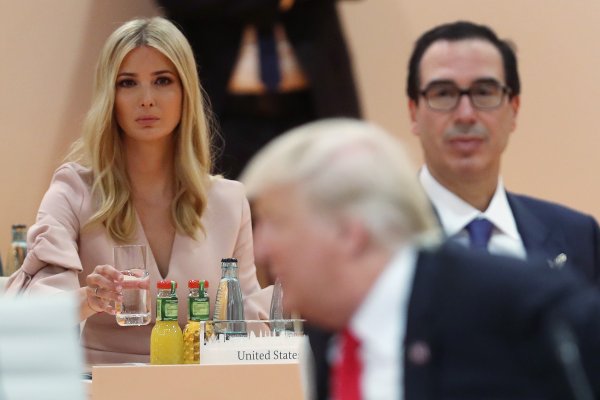 Trump Praises Ivanka in Germany
Next Up: Editor's Pick