As President Trump mulled pulling the U.S. out of the Paris Agreement on climate change earlier this year, supporters of bold policies to address global warming around the world feared that the U.S. withdrawal would hinder action on the issue.

But on Saturday, with the exception of Trump, the leaders of the world’s largest economies gathered at the G20 reaffirmed their commitment to fostering clean energy development and implementing the Paris Agreement on climate change. Instead of attracting other laggards, Trump’s decision freed the rest of the world to issue a strong Climate and Energy Action Plan for Growth Saturday that aims to address global warming — and measures aimed at appeasing Trump were mostly absent.

“In the end, the negotiations on climate reflect dissent — all against the United States of America,” German Chancellor Angela Merkel told reporters following the summit, according to a Reuters report.

Drafters of the climate action plan—a joint statement on the path forward to address global warming—needed the support of all of its signatories, typically all the G20 countries. With that in mind, the U.S. had been pushing to weaken the document for months prior to Trump’s decision to leave the Paris accord, according to a report in Climate Home. And German officials who coordinated drafting the documents had adjusted some points in response, including removing references to pricing carbon emissions and ending fossil fuel subsidies.

U.S. withdraw from the Paris Agreement minimized pressure to address U.S. concerns, allowing the other countries to draft a more robust statement. The document notes that the U.S. “is currently in the process of reviewing many of its policies related to climate change and continues to reserve its position on this document and its contents.”

Still, a stronger climate action plan does not make up for the U.S. leaving the Paris Agreement. The U.S. — the world’s largest economy and second-largest emitter — played a key role in shaping the 2015 climate deal brokered under former President Barack Obama’s administration. Trump’s decision to withdraw will make it more difficult for a future U.S. administration to regain that leadership position.

Paris withdrawal “meant they didn’t have to haggle with the U.S. That was good,” said Andrew Light, an Obama administration climate adviser who is now a senior fellow at the World Resources Institute. “Would I rather be in a world where the U.S. stayed in? Yes.”

The rift over climate change strained diplomatic discussions at the G20, even as U.S. withdrawal simplified discussions on the climate action plan. The joint communique covering the entire summit — which the U.S. joined after heated negotiations — addresses many different issues including climate change. In the statement, the U.S. forced recognition of the fossil fuel industry over objections from others.

“The United States of America states it will endeavor to work closely with other countries to help them access and use fossil fuels more cleanly and efficiently and help deploy renewable and other clean energy sources,” the statement reads.

Nonetheless, policy experts say the strong statements on global warming that emerged from the G20 were far from a foregone conclusion going into the conference. But, hoping to show that the rest of the world maintained committed to addressing climate change, Merkel prioritized a strong statement on the issue and pushed otherwise-reluctant countries like Saudi Arabia to get on board.

“Merkel really wanted a strong outcome on climate and energy even if she couldn’t bring Trump along, and she delivered in full,” Steve Herz of the Sierra Club’s International Climate Program told TIME in an e-mail. “Even traditional laggards like Saudi Arabia did not see it in their interests to cross the Germans and the other champions of the agreement to back Trump.”

Trump’s election last fall disrupted global efforts to address climate change — perhaps more than any other geopolitical event could have. As a candidate, Trump had repeatedly denied the scientific consensus on climate change and promised to “cancel” the Paris Agreement. But upon taking office, Trump initially delayed a decision to withdraw the U.S. amid a heated debate on the topic within his administration and outside lobbying on both sides.

And, while most environmental groups argued that the U.S. should stay in, with Trump in office, many people who support addressing climate change argued that U.S. withdrawal would be the best path forward to avoid America undermining its implementation.

“There is a danger remaining in could muddy the waters and allow U.S. citizens [to] believe they are contributing to resolving a global problem, when the opposite is the case,” Joseph Curtin, a member of the Irish Government’s Climate Change Advisory Council, wrote in an op-ed. “Continued policy pretense leads to a place where nothing is real and nothing can be believed.” 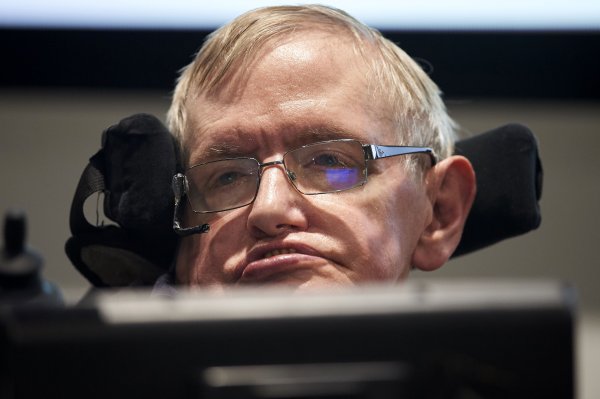 Steven Hawking: Trump Could Damage the Planet Irreversibly
Next Up: Editor's Pick