You're Putting On Sunscreen the Wrong Way: Study

The most forgotten areas of the face, as revealed by an ultraviolet-sensitive camera, were on or around the eyelids: a place where 5% to 10% of all skin cancers occur, the researchers said.

For the study, which has not yet been published in a peer-reviewed journal, researchers at the University of Liverpool in England asked 57 men and women to apply sunscreen to their faces, without any further instructions. Then they used a special camera to snap photos of the freshly lotioned faces, in which areas covered with sunscreen appeared black.

The researchers used a computer analysis to determine that, on average, people missed 9.5% of their faces—most commonly because they skipped spots around the eyes. About 13% of people missed their eyelids, and 77% of people missed spots between the inner corners of the eyes and the bridge of the nose.

Then they asked the participants to return to the lab for a follow-up visit and repeat the sunscreen application, this time giving them extra information about skin cancers of the eye region. There was a slight improvement in eyelid coverage, but none for the area between the eyes and nose. Even after the warning, people still left an average of 7.7% of their face unprotected.

The findings were disappointing, says study co-author Kevin Hamill, a lecturer on eye and vision science, but not very surprising. “Other studies have shown that most people apply less than half of the amount of sunscreen they need to achieve the protection that their product advertises,” he said in an email.

When the researchers followed up with participants to learn why their eyes were so poorly covered, only about half were able to cite a specific reason. “It wasn’t a conscious decision,” says Hamill. “Most people thought that they were effectively covering the eyelids.” This finding is especially worrisome, he adds, since people will spend longer in the sun if they think they are protected.

MORE: How to Get a No-Sun Tan

Hamill knows that it’s not always practical to apply sunscreen so close to the eyes; many manufacturers warn against it, and about a quarter of study respondents said they’d skimped on coverage because they wanted to avoid eye irritation. That’s why, he says, it’s important to rely not just on SPF lotion alone.

“You do want to be more thorough when applying sunscreen,” he says, “but you also want to use other forms of protection, such as sunglasses—which can protect the high-risk areas around the eyes—hats, and shade.” He also recommends looking for water-resistant SPF formulas designed specifically for the face, which may be less likely to run into the eyes and sting.

Hamill also recommends using plenty of sunscreen and reapplying often—especially on the face and neck, where more than 90% of basal cell carcinomas (the most common form of skin cancer) are diagnosed. “That way even if you miss a spot first time around, or rub some off, you’re likely to get it the next time.” 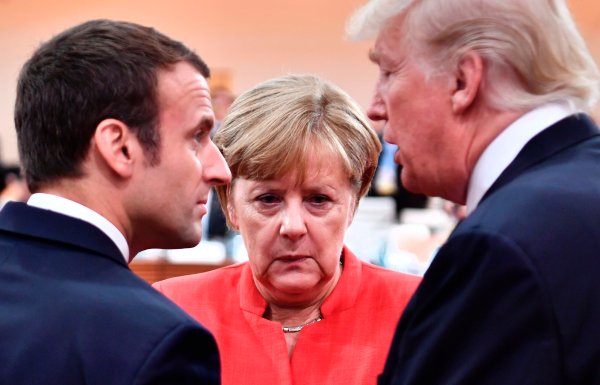 The G20 Must Defend the Paris Accord — For the Sake of Our Health
Next Up: Editor's Pick