Let it be known that actor Jeremy Renner is not afraid to commit, body and soul, to his stunt work. While filming for an upcoming movie, the action movie veteran had a bit of a painful incident. The resultant injury? A fractured right elbow and fractured left wrist on different sides, pretty much putting both of his arms out of commission for the time being. But he’s keeping an upbeat attitude about the whole thing, as Variety reports.

“That’s how it goes,” Renner said of the injuries during an appearance at the this year’s Karlovy Vary Film Festival in the Czech Republic on Friday. “It’s part of the job.”

Renner will soon be making his return as Hawkeye in Avengers: Infinity War, the newest installment in the superhero action franchise that’s still in progress. But funnily enough, his injury didn’t happen on the set of that film, filled as we can safely predict with dangerous explosions and combat. Instead, it actually happened on set for a comedy, Tag, in which he acts alongside Hannibal Buress, Ed Helms, Isla Fisher, and Rashida Jones.

“I’m doing a job that isn’t really requiring a ton of stunts. It’s not an action movie; it’s a comedy. It just happens to have a few stunts in it,” he said, noting the irony. “It affects how I get dressed in the morning. I can’t tie my shoes, but outside of that and everything else, I can kind of get by,” he added.

He also called himself a “a problem solver,” and said he was doing everything he could to heal quickly so he can get back to tying his shoes without a problem. 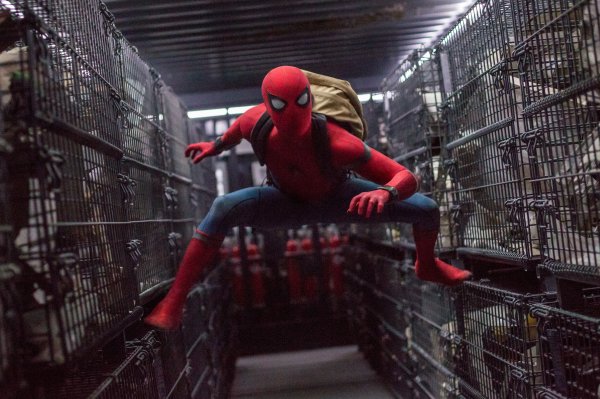 Explaining Those Two Post-Credit Scenes in Spider-Man: Homecoming
Next Up: Editor's Pick