Downtown residents cast ballots at the Weingart Center for the Homeless on Skid Row in Los Angeles, Calif., on Nov. 8, 2016.
Brian van der Brug—LA Times/Getty Images
Ideas
By Tomas Lopez
Lopez is Counsel for the Democracy Program at the Brennan Center for Justice.

For a commission claiming to be serious about ensuring the integrity of elections, President Donald Trump’s newly formed “Presidential Advisory Commission on Election Integrity” is off to a troubling start.

Last week, the commission, chaired by Vice President Mike Pence and Kansas Secretary of State Kris Kobach, sent a letter to chief election officials throughout the country seeking voters’ sensitive, personal information — including names, addresses, the last four digits of voters’ social security numbers, information on which elections people have voted in since 2006 and information on felony convictions — as well as answers to a number of open-ended questions. All of this information was to be provided in just two weeks.

The responses from states faced with this alarming request have varied. Some are currently reviewing the commission’s letter. Others have refused to provide any voter information protected by their state laws. Others still have rejected the commission’s request outright.

Secretaries of State from both parties have spoken out about their inability to turn over the information solicited by Kobach. The Mississippi Secretary of State — a Republican — said the commission could “go jump into the Gulf of Mexico.” Arizona’s Secretary of State, Michele Reagan, also a Republican, said she could not “in good conscience” release sensitive voter data for a “hastily organized experiment.” And in a bizarre twist, even Kobach said his own state would be unable to share some information.

According to Trump, states refusing to comply with the commission must have something to hide — but the President is wrong. There are a lot of good reasons why states would be inclined to ignore the commission’s request.

State officials refusing to hand over privileged, personal information and fill out lengthy questionnaires are rightfully placing their states’ laws, resources and citizens ahead of an ill-advised mandate from a group with dubious motives and methods. The panel — created to bolster Trump’s completely baseless statement that 3–5 million people voted illegally in 2016 — has done nothing to alleviate concerns that it’s no more than a bogus alternative fact–finding mission, digging for non-existent evidence of fraud to impose stricter federal voting laws that could disenfranchise eligible voters.

A spokesperson for the Vice President confirmed that the commission plans to compare the data it receives to names on other federal databases. This is a problem because we’ve seen that, with the wrong methods, comparing databases can lead to inaccurately large reports of people registered in two places, or alleged non-citizen registrants (that’s what has happened with similar efforts in the past, including through the Kobach-led Interstate Crosscheck). Those inflated figures can become the justification for needlessly harsh voting restrictions.

One look at the commission’s makeup reveals that they could end up undermining, not enhancing, public confidence in our elections. It includes proponents of the nation’s harshest voting restrictions and, despite claims of bipartisanship, is chaired by two members of the same political party. By contrast, past election panels were chaired by respected lawyers for President Obama and Mitt Romney, and Former President Jimmy Carter and Republican Secretary of State James A. Baker III.

The commission’s request is not only poorly conceived; it’s also poorly executed. Kobach’s letter asks states to provide information they may not, legally, be at liberty to share under state and federal law. Many states place limits on what their election officials can disclose and how that information can be used — for instance, by barring commercial use or permitting only political or campaign use. Secretaries of State who provide voter information to the panel could face various adverse legal consequences (explored in greater detail here). For instance, an individual in Washington state could be sued in civil court if they do not take “reasonable precautions” to prevent voter data from being used by others for barred purposes.

And even if the commission backtracked from its previous statements that any information submitted by states “will also be made available to the public,” a federal law would likely require the commission to make any data it received available for public consumption. That’s because commissions like this one are bound to provide a certain level of transparency to the general public. Moreover, the panel’s vague directive that all voter data should be submitted through an online portal means private information, regardless of whether or not it’s public, could be vulnerable to foreign hacking, theft or other foul play.

If this commission is truly interested in working with state officials to improve elections, there is plenty of work to be done — and it wouldn’t require those officials to collect and send private information to the federal government when they have their hands full running elections. The panel instead could provide resources so voting machines and registration databases are safe from hacking or foreign interference; systems in Illinois and a reported 38 other states were targeted by Russia in 2016. It could also consider examining the benefits of implementing reforms like automatic voter registration, which would automatically register eligible citizens to vote when they interact with a government agency, unless they decline. The reform has recently been approved by eight states and Washington, D.C. It would help keep voter rolls accurate, up-to-date and secure.

Voters must continue to tell their states why standing up to Trump and his sham commission is important and the right thing to do. There is a lot at stake here, and both states and voters cannot afford to lose this battle. 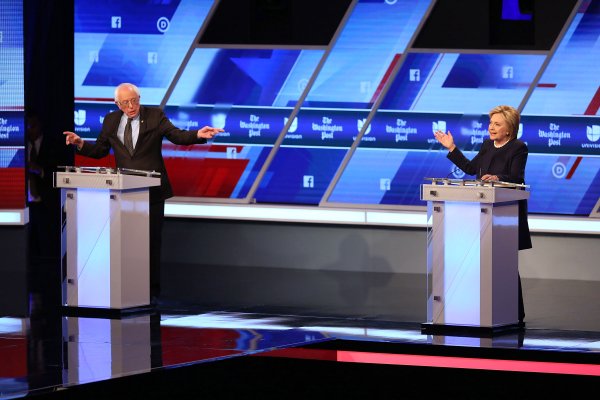 Rep. Raúl Grijalva: The Bernie-Hillary Debate Is Destroying the Democratic Party
Next Up: Editor's Pick