A New York hospital has offered to admit Charlie Gard, the terminally ill baby at the center of a controversy that has elicited reactions from President Donald Trump and Pope Francis.

New York Presbyterian Hospital and Columbia University Irving Medical Center offered to admit Charlie “provided that arrangements are made to safely transfer him to our facility, legal hurdles are cleared, and we receive emergency approval from the FDA for an experimental treatment as appropriate,” according to a statement given to The Washington Post.

Another option was given to Charlie’s parents, Connie Yates and Andy Gard, and to London’s Great Ormond Street Hospital, where Charlie is currently being treated. The U.S. hospital said it could supply the experimental drug the boy’s parents wanted to try to the U.K. hospital, and provide instruction on how to administer it to an 11-month old baby.

Charlie has a rare genetic disease and resulting brain damage that has left him without the ability to move his arms and legs, eat or breathe on his own. He suffers from infantile onset encephalomyopathy mitochondrial DNA depletion syndrome (MDDS), according to The Telegraph.

The family’s story has made headlines worldwide, with Pope Francis and President Donald Trump offering support to the grieving parents.

“The Holy Father is following with affection and emotion the situation of little Charlie Gard and expresses his closeness to his parents. He is praying for them, in the hope that their desire to accompany and care for their own child until the end will be respected,” the director of the Holy See Press Office, Greg Burke, said in a statement Sunday.

On Thursday, it was reported that the Pope wanted to give Charlie a Vatican passport so he can be treated there.

President Trump tweeted his support earlier this week, saying, “If we can help little Charlie Gard, as per our friends in the UK and the Pope, we would be delighted to do so.”

A White House spokesperson alluded to the possibility of having the baby treated in the United States on Monday.

“Upon learning of baby Charlie Gard’s situation, President Trump has offered to help the family in this heartbreaking situation,” Helen Ferre, the director of media affairs at the White House, said in a statement. “Although the President himself has not spoken to the family, he does not want to pressure them in any way, members of the administration have spoken to the family in calls facilitated by the British government. The President is just trying to be helpful if at all possible.

“Due to legal issues, we can not confirm the name of doctor or hospital where the baby could be treated in the United States.”

His parents fought against the decision to take him off of life support because they wanted to take him to the U.S. for an experimental treatment.

A spokesperson for the hospital told The Washington Post in a statement that the decision to postpone Charlie’s death has allowed his parents to spend more time with their son.

Andy Gard, the father of 11-month-old Charlie, spoke out in a Facebook post this week about the support he has received — and the opposition from London courts — as he and the child’s mother push to take Charlie to the U.S. for medical treatment.

“Fight for love and honesty, not the state and corruption. Fight for truth. It’s #charliesfight. When you’ve seen him in the flesh you’d know, you will have no doubts. No one ever has,” Gard wrote alongside an article by The Sun which alleges that British Prime Minister Theresa May is prepared to battle with Trump to oppose Charlie’s trip to the U.S. 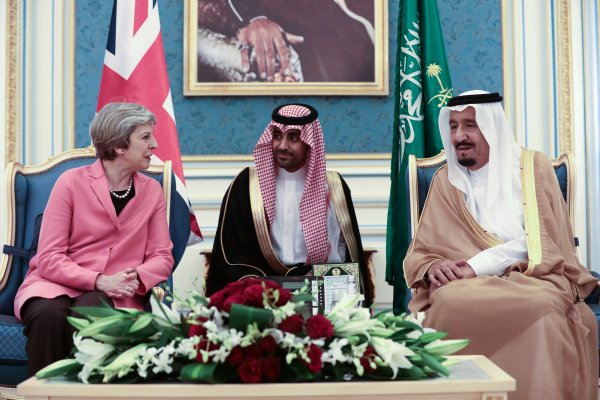 Report: Saudi Arabia Has 'Clear Link' to U.K. Extremism
Next Up: Editor's Pick