Salvadoran women take part in a demonstration to demand the decriminalization of abortion, outside the Legislative Assembly in San Salvador, Feb. 23, 2017.
Marvin Recinos—AFP/Getty Images
By Kevin Lui

A judge in El Salvador — where abortion is illegal in all circumstances — has sent a 19-year-old rape survivor to 30 years in jail because her baby was stillborn, on the grounds that her failure to get prenatal care amounted to homicide.

High schooler Evelyn Beatriz Hernandez Cruz, 18 at the time of childbirth, reportedly gave birth in a bathroom last April after a bout of acute pain in her stomach and back. She hadn’t realized that she was in the third trimester of a pregnancy, the Guardian reports.

Hernandez had reportedly been raped repeatedly for months prior in a forced sexual relationship. She didn’t report the rapes out of fear, but the hospital that received her did report the stillbirth to authorities, says Amnesty International.

Medical experts could not determine if the fetal death happened before or after delivery, according to the Guardian. The judge hearing the case reportedly accepted prosecutors’ theory that Hernandez didn’t seek prenatal care because she didn’t want the baby, and further suggested her mother might also be criminally responsible at sentencing.

“El Salvador’s anti-abortion law is causing nothing but pain and suffering to countless women and girls and their families,” Amnesty’s Americas director Erika Guevara-Rosas said in a statement.

The Central American nation has imposed a blanket ban on abortion since 1998. According to Amnesty, women who experience complications during their pregnancies — including miscarriages — have been convicted on charges of aggravated murder, and imprisoned for up to 40 years.

“The total ban on abortion in El Salvador violates women’s rights to life, health, privacy, due process and freedom from discrimination, violence and torture and other ill-treatment,” Guevara-Rosas said, calling for the law to be repealed. 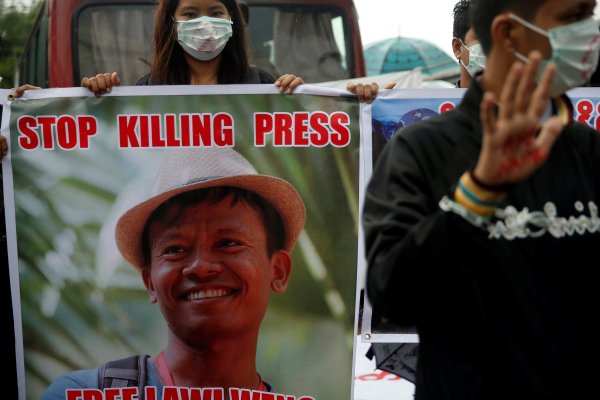 Arrested Journalists Highlight Lack of Free Press in Myanmar
Next Up: Editor's Pick