A Brief History of U.S. Presidential Struggles with North Korea

When it comes to North Korean diplomacy, U.S. Presidents have long been faced with a number of choices—none of them particularly good.

Since the 1990s, presidential approaches have ranged from reconciliatory to openly unfriendly. But truly effective diplomacy remains elusive, and an aggressive military approach has been seen largely as a last resort, since it could provoke nuclear violence or an attack on Seoul.

There have been some key differences in approach. Then-President Clinton made a number of visible attempts at negotiating with North Korea, including sending then-Secretary of State Madeleine Albright to North Korea for an official state visit in 2000.

In contrast, George W. Bush took what RAND Senior International/Defense Researcher Bruce Bennett characterizes as a “more hands-offish” approach to negotiations, largely because of ideological opposition to the North Korean regime’s human rights abuses. (Bush famously placed North Korea into an “axis of evil” along with Iran and Iraq in his 2002 State of the Union Address.) And following rejected negotiations offers and increased nuclear testing, Obama would eventually settle into a policy of strategic patience, bolstered by a looming threat of nuclear retaliation.

“The rhetoric between the administrations emphasizes difference,” says Jeffrey Lewis, an expert on nuclear strategy at the James Martin Center for Nonproliferation Studies.

But that popular narrative is a little misleading, say Lewis and other experts on the region. “In fact, the policies are really similar. There are differences, but there’s a lot more continuity and dysfunction that people really present,” Lewis says.

North Korea experts say they see U.S. Presidents making similar mistakes over and over—missteps that may stem from a misunderstanding of the Kim regime. Cha, who served as a U.S. delegate at the 2003 six-party talks aimed at negotiating North Korean de-proliferation, points out that even in the face of bipartisan agreement over goals in North Korea, US attempts have fallen flat because traditional means of negotiation and control are simply not effective there.

One such strategy is reliance on sanctions. Since the Bush era, the U.S. has imposed economic sanctions against North Korea aimed at stifling their nuclear program. Those measures were further tightened under the Obama administration, following the fourth in a series of nuclear tests that North Korea has launched since 2006.

But sanctions rarely have meaningful impact on the nuclear program itself. And for a nation that went through debilitating famine in the ’90s—a disaster that claimed the lives of as many as 3 million people—largely because of state policies, it can be difficult for sanctions to sway the government even if they affect the economic health of the country’s citizens, says Bennett.

Secondly, negotiations attempts have fallen flat because of North Korean dealings. Over the past few decades, North Korea has consistently reneged on arms agreements, hindering U.S. Presidents’ efforts to stitch together a truce.

Throughout 1994, the U.S. participated in a series of negotiations culminating in the “Agreed Framework,” under which North Korea agreed to freeze proliferation and replace its nuclear power reactors with proliferation-resistant Light Water Reactors. In a speech, Clinton lauded the agreement as “a crucial step toward drawing North Korea into the global community.”

But just a few years later, it became clear that North Korea had been consistently violating the terms of the agreement since its inception, and the framework disintegrated. Similarly, an Obama-brokered deal in 2012, the Leap Day Agreement, dissolved in just weeks, after a satellite launch attempt from Pyongyang.

The fact that those deals quickly dissolved, say experts, is evidence of a regime and a culture that views negotiations as a means to temporary truce, and agreements as nonbinding. These repeated frustrations have led Presidents stretching back several administrations to consistently end up pushing the issue off—something that may no longer be possible now that the nation possess an ICBM.

“There are just such limitations that most of the presidents have eventually turned to something akin to strategic patience: ‘we’re going to kick this can down the road,’” says Bennett.

But that doesn’t mean that the playing field itself hasn’t changed. In the mid ’90s, when the problem was on then-President Clinton’s plate, for example, North Korea “had only a handful of very crude weapons,” says Cha. Now, more than 20 years and five nuclear tests later, the stakes have changed—and that means that Trump may have to break the pattern that’s held for the last few administrations.

“This issue has been a can kicked down the road for some time and it’s really his problem now,” Cha said. “He’s the one who has to deal with it now, in a way that no president has had to before.”

Correction: The original version of this story misstated when the 1994 agreement with North Korea failed and the reasons for President Clinton’s decision not to visit the country. 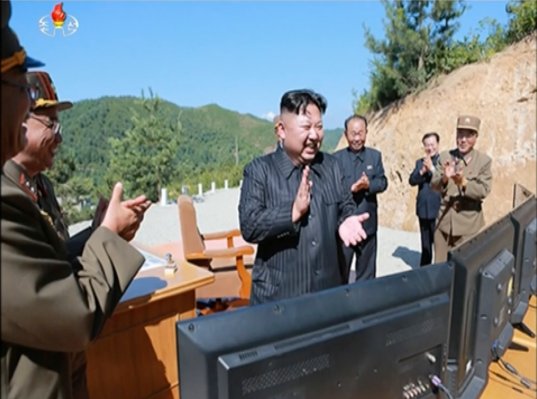 7 Questions About North Korea's Nuclear Missiles You Were Afraid to Ask
Next Up: Editor's Pick