Game of Thrones' Missandei on Grey Worm Romance: 'These Two Have Always Hidden Behind Their Duty'

Amid the scheming, soaring dragons, thundering horses, and charging soldiers in the trailers for HBO’s seventh season of Game of Thrones, there’s a hint of potential bliss in there, too — a glimpse of Missandei (Nathalie Emmanuel) ripping off Grey Worm’s (Jacob Anderson) top.

What transpires between Daenerys’ (Emilia Clarke) trusted adviser and the commander of her Unsullied army this season is a mystery of course, but fans of the duo have long rooted for them to overcome their strict adherence to their duties and to have a bit of fun in this war-torn story.

“These two have always hidden behind their duty,” Emmanuel tells EW. “But times like this where it’s not guaranteed they will even see each other again, where he might be killed and she might be … who knows … they’re having to confront their emotions and feelings to each other.”

Since Grey Worm is a eunuch, any potential intimacy is bound to have certain, well, limitations.

Overall, this season represents another creative step up for the series, the says actress, who in recent years has split her time between shooting Thrones and filming The Fast and the Furious and The Maze Runner franchises. “It’s the same thing every season: I don’t think [showruners David Benioff and Dan Weiss] can outdo themselves, and then they do. And the role that Missandei has been playing becomes ever more important because they’re facing war and potential death. Distractions aren’t really welcome, though Missandei has a few of her own.”

Another distraction — well, for us anyway — is that Missandei gets a new look this season. With her arrival in Westeros, Missandei is stepping into a cool black leather outfit (photo below) that’s more suitable for winter after spending several seasons in the Meereenese desert. Quips Emmanuel: “[The costume] feels like a gladiator/Power Ranger.”

Previous: All 65 Game of Thrones season 7 photos in one place

For ongoing Game of Thrones coverage, follow @jameshibberd for the latest; subscribe to our GoT newsletter for breaking news alerts, and check out our GoT podcast.

Game of Thrones is back on July 16. 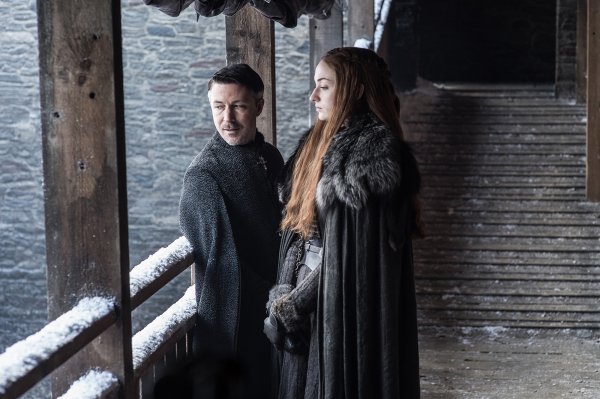 This Game of Thrones Character Could Be the Key to Littlefinger's Fate
Next Up: Editor's Pick