President Trump drew international headlines for declining to shake the hand of German Chancellor Angela Merkel when she visited the White House earlier this year.

Now it seems the tables have turned. Poland’s First Lady, Agata Kornhauser-Duda, appears to have at first passed by Trump’s offer of a handshake during his visit to Warsaw.

The President and First Lady Melania Trump were standing on stage with Polish President Andrzej Duda, and his wife Agata Kornhauser-Duda Thursday in Warsaw. As the four were exiting the stage, Trump and Andrzej Duda exchange a handshake. He then extended his hand to Agata Kornhauser-Duda, who promptly ignores the gesture, opting instead to simply shake Melania Trump’s hand, before turning to shake the President’s hand after all.

This handshake is one of several Trump has exchanged since he was inaugurated that has gone viral or been scrutinized. In addition to the incident with Merkel, French President Emmanuel Macron’s knuckles famously turned white after he shook Trump’s hand at the G-7 meeting, which he later characterized as a “moment of truth.” The President’s handshakes with Canadian Prime Minister Justin Trudeau and Japanese Prime Shinzo Abe were also the subject of thorough handshake analyses on the internet.

Watch the interaction on the video above. 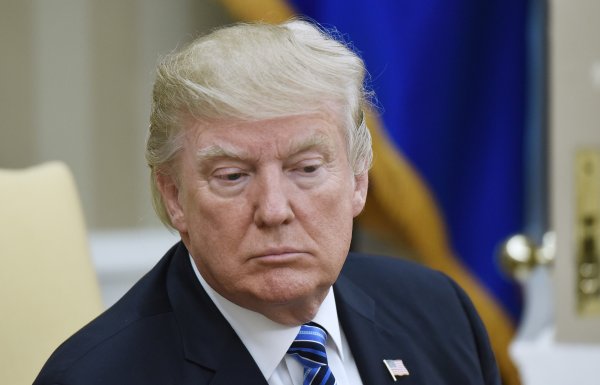 Trump Tweets a Video of Him Punching CNN in the Face
Next Up: Editor's Pick