An Indian court has allowed followers of a spiritual guru to preserve his body in a freezer, as they believe he is not dead, but in a deep state of meditation.

Ashutosh Maharaj was the founder of the sect Divya Jyoti Jagriti Sansthan (Divine Light Awakening Mission) and supposedly died of a cardiac arrest in 2014, the BBC reports.

The court’s decision comes after a three-year legal battle between disciples of the sect and Dalip Kumar Jha — who claims to be Maharaj’s son, and is fighting to cremate the body in line with Hindu custom.

The body of Maharaj — who founded the multi-million dollar sect in 1983 — is currently being kept in a commercial freezer at his heavily guarded ashram in the northern state of Punjab. His followers believe he is in a deep spiritual state but will one day come back to life.

“Medical science does not understand things like yogic science,” a spokesperson for the guru told the BBC in 2014. “We will wait and watch. We are confident that he will come back.”

But Jha has alleged the guru’s followers were keeping his body on ice so that they could maintain control of his estate. Over the years Maharaj had attracted millions of followers and his sect had amassed an estimated $120 million worth of assets.

According to Agence France-Presse, it was unclear whether the court agreed with the sect’s assertion that Maharaj had never really died. 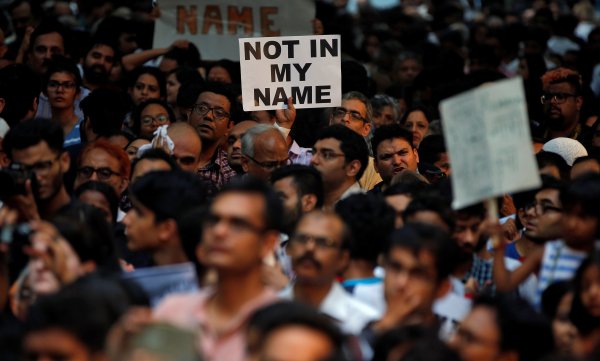 Not In My Name: Indians Protest Against 'Beef Lynchings'
Next Up: Editor's Pick