Reporters protest as they call on Myanmar government and military to release reporters who were arrested in Yangon, Myanmar June 30, 2017.
Soe Zeya Tun—Reuters
By Colin Hinshelwood / Chiang Mai

The arrest last week of three journalists at a military roadblock in Myanmar highlights once again the agonizing lack of press freedom in the country. It was also a telltale reminder that the anticipated program of democratic reform promised by Aung San Suu Kyi takes a back seat when the army generals decide to flex their muscles.

Rewind to November 2015 for a moment: the people of Myanmar had just voted in a historic general election. As the exit polls and results came through, it was clear that the people’s champion, Nobel laureate Aung San Suu Kyi, and her party the National League for Democracy (NLD) had won by a landslide. Even the leaders of the ruling military clique were conceding defeat. Euphoric crowds draped in scarlet NLD banners and bandanas flocked to her party’s headquarters in Yangon, dancing, chanting Suu Kyi’s name and celebrating. It was a day many had dreamed about, but never believed would actually happen.

In the Chiang Mai bureau of the Democratic Voice of Burma (DVB) TV station in Thailand’s north, editor-in-chief Aye Chan gathered his staff around and popped a couple of bottles of lukewarm sparkling wine and poured it into plastic cups. “To democracy!” he toasted and everyone cheered.

For Aye Chan and many around him, it was an emotional moment; and the end of a journey that had taken more than 20 years. Launched in 1992 in Oslo, where it was funded primarily by the Norwegian government, DVB had begun life as a radio station, broadcasting clandestinely to listeners inside Myanmar, formerly Burma (to this day, DVB has never recognized the military-anointed name Myanmar). It brought a highly charged air of defiance to the country’s heavily censored media, with reports detailing human rights abuses, oppression, corruption, and the perspectives of ethnic rebel armies.

During the Saffron Revolution in 2007, when Buddhist monks led anti-government protests though the streets, DVB’s undercover journalists brought the world images of a bloody military crackdown on peaceful demonstrators. These furtive video journalists became the backbone of the documentary Burma VJ, which was nominated for an Oscar as Best Documentary a year later. In 2010, DVB was shortlisted for the Nobel Peace Prize.

After decades of military rule, Myanmar had now elected a democratic government. For Aye Chan and thousands of other exiles, it was time to go home.

“It’s great to be back in my home country and able to work in journalism,” he told TIME from the modern new DVB bureau in Yangon earlier this week. “Of course, we face challenges from time to time as the country moves from complete military control to halfway civilian rule. The profession we chose is not easy. I wish I could say — just as Nelson Mandela did after he walked free after 27 years in prison — that it’s been a ‘long walk to freedom’. But I still can’t say that.”

One of those who worked with Aye Chan throughout most of that time in exile was Aye Nai. Now 53, the seasoned reporter was delighted to return to Myanmar.

“Aye Nai was never settled abroad,” says his wife, Cherry Win. “He only wanted to go home to work for the benefit of his country. He is really patriotic.”

Cherry currently lives in Chiang Mai with their two children, aged 11 and eight. She was planning to return to Myanmar at the end of this year’s school term. But last week her husband was arrested, along with two other journalists as they returned by road from a drug-burning ceremony in an area under the control of an ethnic armed group known as the Ta’ang National Liberation Army (TNLA).

The three reporters, along with three civilians who were traveling alongside them, were immediately incarcerated and charged with unlawful association, one of Myanmar’s draconian laws and constitutional clauses that are routinely rolled out to curb any form of dissent.

Aye Nai now awaits a court hearing on July 11. If convicted, he will likely be sentenced to either two or three years in prison. So will his DVB colleague, Pyae Phone Aung, described as “young and active, with a bright future.” The third detained reporter is Lawi Weng, an ethnic Mon journalist who works for The Irrawaddy, another Myanmar news organization that operated from exile in Thailand for more than 20 years.

“Lawi had proposed to me many times, but I always wanted to wait,” says his fiancée Loa Htaw. “Now I regret it.”

Speaking from Bangkok, Loa Htaw says she is anxious about Lawi Weng’s health. She doesn’t think he will hold up well in prison. One family member was able to visit each of the three detainees earlier this week at Hsipaw prison in eastern Shan state. Well-wishers sent food and books for the three. Aye Nai reportedly asked for his food donations to be handed over to his two colleagues as they were unable to stomach the prison food.

Wai Moe, a Myanmar reporter for the New York Times, was a colleague of Lawi Weng’s for five years at The Irrawaddy’s Chiang Mai office. He recalls Lawi Weng as “unassuming and quiet,” but “hard-working and dedicated.”

As a 14 year old, Wai Moe was arrested in Yangon for his role in producing a student magazine. He was sentenced to five years, some of which he spent in the infamous Insein Prison, which held hundreds if not thousands of political prisoners and dissidents during the military junta era.

But no one expected the same treatment to be meted out under the watch of national freedom fighter Aung San Suu Kyi. Yet the arrest of the three reporters in northern Myanmar was by no means an isolated incident.

In November, Yangon’s chief minister filed a lawsuit against both the editor and CEO of Eleven Media Group, alleging defamation after an editorial was published accusing an unnamed minister of corruption and nepotism in a local real estate dealing.

Online defamation is an offense covered under Myanmar’s vague and wide-ranging Telecommunications Act. Commonly known as Article 66(d), critics including Amnesty International and the Committee to Protect Journalists have slammed the law as a ploy to stifle criticism.

Last month, Kyaw Min Swe, the editor-in-chief of another national newspaper, The Voice Daily, was also subjected to the sharp end of a defamation lawsuit. He and a staff columnist were sued by a disgruntled military officer who took exception to a satirical piece lampooning the army. Both were arrested and remain behind bars while they await trial.

On its Myanmar home page, U.S.-based Human Rights Watch (HRW) has noted: “Burma’s civilian-led government, which took office in March 2016, has failed to meet expectations to carry out significant reforms. Authorities continue to use repressive laws to arrest and prosecute activists for criticizing the government or military.”

Speaking to TIME earlier this week, Phil Robertson, the deputy director of HRW’s Asia division, said, “It’s not really clear what the NLD’s policies are from one day to the next. The party has claimed in the past to favor freedom of the press, but then [NLD veteran] Win Htein comes out and says that these three journalists deserve to be prosecuted for not asking permission to go to those areas.”

But the question of requesting permission to visit the TNLA territory is “unfeasible,” says Sai Muang, the editor-in-chief of Shan Herald, a news group which has reporters and stringers dotted across the volatile region, where various ethnic rebel groups and armed paramilitaries are based. “If you get permission from the TNLA or other outlawed rebel groups to visit their area, then you cannot request permission from the government too.”

He added: “In years gone by, we could visit and interview the ethnic armed groups. Now, under this so-called democratic government, media are being restricted.”

Read More: Aung San Suu Kyi Had a Plan to Bring Peace to Myanmar. But Convincing Others Hasn’t Been So Easy

That party veteran Win Htein would have no sympathy for the jailed reporters is disturbing given that he too spent years as a political prisoner during the junta epoch. As did many members of the ruling NLD, including Suu Kyi who spent 14 years under house arrest.

Now Suu Kyi, who holds dual roles as foreign minister and state counselor, is considered the de facto ruler of Myanmar. Critics have panned her for staying silent on a number of human rights issues in the country, especially ethnic violence in the country’s west. Her supporters say she is hamstrung by a constitution that enshrines the military’s position in politics and gives them autonomy beyond the control of the government.

On Thursday, Suu Kyi broke that silence. Speaking to reporters, she said the government may finally revise those laws that observers say have been used to curb criticism and free speech, and specifically referred to the Telecommunications Act that that covers “online defamation,” without going into further detail. According to Reuters, Myanmar officials have indicated that the law may be changed to enable judges to release on bail those charged under the law.

“This should not be seen very narrowly as three journalists against the army or vice versa, but in general, as to whether the existing laws are in line with our desire for justice and democratization,” she said.

Although the TNLA and several other militias may be listed as “outlaws” or even “terrorists” by the Myanmar government, Suu Kyi is herself currently hosting peace talks in which such ethnic armies are invited to the table. Negotiations and allegiances are shifting sands in the years-long process. While eight groups have signed a national ceasefire with the government, many more have resisted. The TNLA and its allies are actively engaged in ongoing armed conflict with Burmese government forces — hostilities which show no sign of abetting.

While in exile, news groups such as The Irrawaddy and DVB were perfectly placed to cover the meetings and movements of the ethnic factions. Now that they are back home in Myanmar, the military can keep tabs on them. And it clearly does.

“Our journalists in the ethnic areas are always afraid of being busted for unlawful association,” says Shan Herald’s Sai Muang. “But in Yangon and the cities they fear the ‘online defamation’ law. Either way, we are in trouble.”

He added: “Wherever there is news, the media must be allowed to go there.” 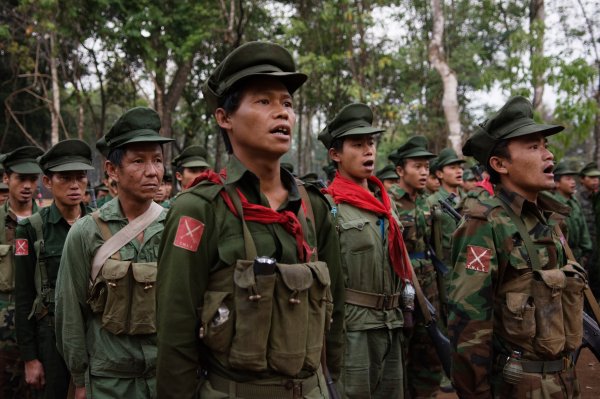