Tim Kaine: People Like Condi Rice and Albert Einstein Show Why We Need the Arts

German-born Swiss-American physicist Albert Einstein (1879–1955), author of theory of relativity, awarded the Nobel Prize for Physics in 1921, playing the violin in 1931.
AFP—AFP/Getty Images
Ideas
By Tim Kaine, Drue Kataoka
Kaine is a Senator for Virginia in the U.S. Congress; Kataoka is a visual artist and a Young Global Leader of the World Economic Forum.

American art is transformative. People can’t help but feel uplifted during a chorus of Woody Guthrie’s “This Land Is Your Land.” Visitors to the Lincoln Memorial often stand in awe, sensing the spiritual presence of the Great Liberator within the marble temple. Video from the March on Washington can give you goose bumps when Mahalia Jackson’s powerful contralto leads the crowd in hymns before prompting Dr. King to “tell them about the Dream, Martin!”

These experiences demonstrate how the arts — visual arts, music, performance, literature — draw us together. They reflect the very essence of what it is to be an American. But many people deride federal investment in the arts as wasteful. Are public investments in the arts practical? Are they important like those in science, technology, engineering and math?

We see this trend of art spurring scientific innovation in the biographies of great scientists. Alexander Graham Bell was a gifted pianist, and his observations about how musical chords traveled through the air inspired him to invent the telephone. In the next century, actress Hedy Lamarr and music composer George Antheil similarly used their knowledge of player pianos to invent a radio guidance system for U.S. torpedoes; these artists’ “frequency hopping” technology has since become a key component of military communications, GPS, WiFi and Bluetooth.

The trend also holds up when we view global scientific advances in recent history. All throughout the Cold War, the Soviet Union and China overwhelmingly beat us in the International Mathematical Olympiads — the “written test” for the young mathematicians and scientists. Nevertheless, our scientists out-innovated these nations hands-down throughout the time period: the Apollo program, laser beams and even the everyday household appliances that became subject of the Nixon-Khrushchev Kitchen Debate demonstrate our scientists’ outperformance of their Soviet-bloc counterparts.

Why was that? America’s enterprising spirit undoubtedly played a big part in our scientific advantage, but these innovations may not have been possible without our unique educational system — where young scientists are required to take courses in the liberal arts. Even scientists who studied physics at Caltech, electrical engineering at MIT or computer science at Stanford were (and still are) required to take civilization, arts, music or writing classes. Charles Vest, National Academy of Engineering President and former President of MIT said in 2013 before the House science, Space and Technology Committee, “I cannot imagine MIT without its visual and performing arts component.” This was not the case in China or the Soviet Union.

The arts drive head-spinning leaps of the imagination that advance science and technology. If we want better scientists and technologists, we should invest in the arts.

Beyond the sciences, the arts benefit our day-to-day life by improving communication skills, making us better at expressing our own ideas and more attentive when listening to others. As a professional artist, Drue uses visuals to express her thoughts and emotions to her audience. As a Senator, Tim uses the listening and collaboration skills he’s picked up as an amateur harmonica player and music fan to seek out common ground between himself and his colleagues. These are practical applications of arts-derived communication skills that work just as well in the classroom, in an office, on an assembly line or anywhere else people interact.

This is not a partisan issue. Former Republican Secretary of State Condoleezza Rice is a classically trained pianist and has spoken often about the critical importance of the arts in education and in her career. She said in 2011, “It absolutely makes my skin crawl when people say, ‘well, music, the arts are extra-curricular,’ because I believe they are an integral part of a broad curriculum that can make kids broader people.” We agree.

We live on opposite coasts and work in different fields. But as we’ve talked, we realize that humans have an instinctive recognition of the gap between what is and what could be. Art, politics, religion and innovation seek — each in their own way — to illuminate that gap and try to close it. And that is how we progress as individuals, as a nation and as a species.

Congress is currently considering how to fund critical government programs for the fiscal year starting on October 1. President Donald Trump has proposed a budget that eliminates both the National Endowment for the Arts (NEA) and the National Endowment for the Humanities (NEH). NEA and NEH programs bring diverse culture and arts from around the nation and the world to Americans in rural, suburban and urban communities. Without these programs, access to the arts will plummet — as will our ability to innovate and build bridges with one another.

Albert Einstein said, “I am enough of the artist to draw freely upon my imagination. Imagination is more important than knowledge. Knowledge is limited. Imagination encircles the world.” We urge congressional appropriators to fully fund the NEH and NEA, to invest in imagination. 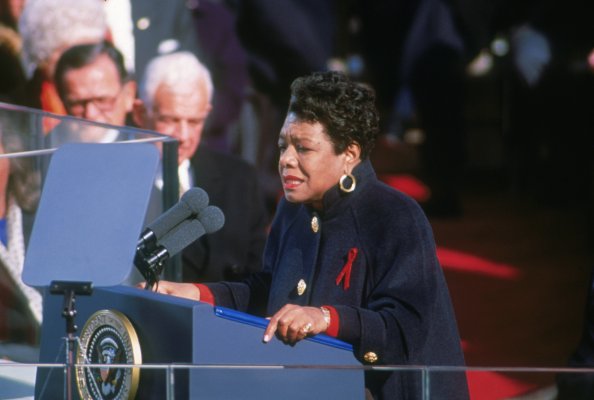 Why Maya Angelou Matters More Than Ever
Next Up: Editor's Pick