US President Donald Trump (L) and US First Lady Melania Trump (R) react after stepping off Air Force One upon their arrival at Chopin Airport in Warsaw,on July 5, 2017
WOJTEK RADWANSK—AFP/Getty Images
By Ian Bremmer

Donald Trump meets his Russian counterpart Vladimir Putin on the sidelines of the G20 on Friday, as U.S.-Russia relations are as strained as they’ve been since the middle of the Cold War.

Yet relations between the two countries’ leaders have never been warmer. Both Putin and Trump have gone out of their way to praise one another publicly, fueling suspicions as Special Counsel Robert Mueller continues his investigation back in the U.S.

Some have already decided Trump is guilty of colluding with Russia to steal the election; to these folks, the fact that Trump has not confronted Putin on election hacking—and has no plans to do so at the upcoming meeting—is proof positive that Trump is in cahoots with the Kremlin. Not so fast. Trump refusing to confront Putin over election hacking is not surprising—or even telling—in the least. If anything, I’m astonished people continue to be astonished by Trump’s perceived lack of interest in the subject of Russian hacking.

There are very few things we can say about Donald Trump with certainty. He contradicts himself frequently, sometimes within days, sometimes within the same sentence. But we know he needs to be seen as a “winner” above all else. It’s why he still takes shots at Hillary Clinton eight months after the election, and why he continues to push allegations of voter fraud despite little evidence to support the highly-charged claim.

Saying ANYTHING about the Russian hacks—for good or for ill—delegitimizes his November win. This would be true even if there was no Russia story dominating the news cycle, even if there wasn’t an FBI investigation ongoing, even if Trump didn’t have a well-documented penchant for strongmen, even if former advisors like Paul Manafort and Carter Page didn’t have troubling ties to Moscow. That’s all true but even if it wasn’t, Trump still wouldn’t bring up the hacking issue. That’s not who he is.

The silence we’re getting from Trump’s predecessor on the Russian hacks is just as telling—and damaging. Yes, Barack Obama privately told Putin to knock it off in the run up to November elections, but did little to back up the rhetoric. In an attempt to avoid looking political during the election to replace him, Obama opted to do next to nothing, putting his legacy ahead of the national security of the American people.

Even Michael McFaul, America’s ambassador to Russia at the time and one of the most consistently pro-Obama people you’ll meet, now admits that Obama should’ve done a lot more, given the scale of the threat that the election hack represented to American democracy. The Obama faithful say that he kept silent for the good of America, to keep faith in the democratic process intact. Given the feverish headlines we continue to read, he clearly has not succeeded.

And if Obama’s warning to “stop hacking” didn’t faze Putin, what difference does it make what Trump says to him on the subject? It matters little what Trump says. It matters much more what he does, or doesn’t do. That remains to be seen.

People love piling on Trump, and he gives them plenty of reason to. But when it comes to the specific issue of Russia hacks, the buck stops with Obama. If it turns out that Trump proactively colluded with the Kremlin, Trump will face the music; even impeachment becomes a real prospect at that point. But we haven’t gotten to that part yet—Mueller is taking his time and doing his work. The media should do the same.

There is one thing we know for certain already—the hacks happened on Obama’s watch, and the responsibility to respond to them fell squarely on him. And while Trump’s silence on the issue is to be expected, it’s Obama’s that continues to be deafening. 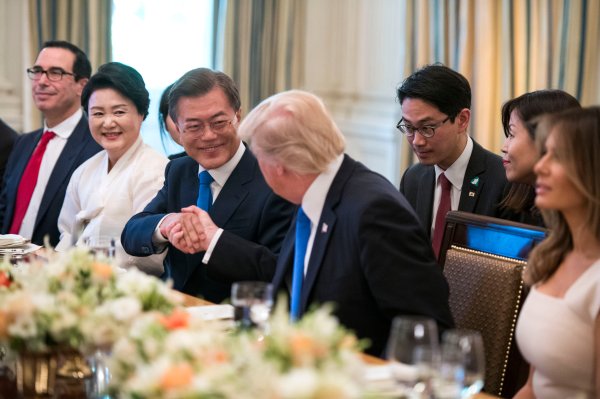 South Korea's Moon Jae-in to Meet with Trump
Next Up: Editor's Pick