Yien Dual (L) takes care of her younger sister (R) Nyachiang Dual, 25, who is recovering from a suspected cholera infection in Padding, near Lankien, Jonglei, South Sudan, on July 3, 2017.
Albert Gonzalez Farran—AFP/Getty Images
Ideas
By David Miliband
David Miliband is the President and CEO of the International Rescue Committee. He is the author of the book Rescue: Refugees and the Political Crisis of Our Time. From 2007 to 2010, he was the Secretary of State for Foreign Affairs of the United Kingdom.

The first official famine in the world in six years, in South Sudan, brings home the stakes of the debate about the U.S. budget. The world’s newest nation has been one of the top recipients of U.S. humanitarian aid since its birth — and that lifeline is now under threat as the U.S. Congress begins to deliberate the Trump Administration’s 2018 budget proposal.

On a recent trip to the region, I met with some of the one million refugees who have fled this country to Uganda over the past year alone, and some of the remaining 7 million dependent on international aid for survival. They had a simple question: Does America care?

Proponents of the Administration’s budget suggest that a 30% cut — taking foreign aid levels back to those of 2008 — is an appropriate “right-sizing” of aid. But the global challenges we face have only escalated since then. Today, there are 65.6 million people forced to flee their homes to escape conflicts and the terrors of groups like ISIS. Thirty million are on the edge of starvation across East Africa, West Africa and Yemen. Ninety-three million people worldwide need some form of humanitarian assistance.

The humanitarian challenge is unprecedented in scale and severity. The Administration not only suggests ignoring its magnitude and urgency, but exacerbating it. The cuts, if enacted as proposed, would cumulatively cut off 30 million more people from food aid and food assistance, effectively doubling the global famine, according to International Rescue Committee and its NGO partners’ estimates.

They would remove basic and life-saving assistance — food, water, medicine — from 11 million people fleeing conflict and disaster, nearly 1 million in South Sudan alone. They would make 4 million new HIV, tuberculosis and malaria infections impossible to prevent. They would cut off 2 million from drinkable water. They would condemn at least 2 million girls to a life without an education. They would make a global pandemic like Zika or Ebola not only far more likely, but deadly enough to take millions of lives — Americans’ included.

When it comes to the effects of global pandemics or migration flows, there is a global community, and we are all part of it. The Administration justifies its cuts by seeking efficiencies — but while more aid does not necessarily mean better, less makes better far more difficult to attain. The choices are matters of life and death. Secretary of State Rex Tillerson has claimed that throwing more money at a goal does not change the outcome; when it comes to the world’s poorest people, it does.

This is about America’s security as well as its conscience. Expanding the defense budget while slashing foreign aid and diplomacy, as the Trump Administration has proposed, is an approach doomed to failure. Defense is a servant of foreign policy, not vice versa, and aid is a reflection of values as well as of interests. When diplomacy and aid are short-changed, defense cannot make up the gaps.

If we have learned anything in the last 20 years — from Iraq to Afghanistan and beyond — it is that we cannot kill our way out of global problems. It is for this reason that every recent U.S. Defense Secretary has argued for a larger — not smaller — foreign aid budget to complement rather than compromise American security interests.

It is true that, as Secretary Tillerson noted, other countries should do more. But the rest of the world pledged a 30% rise in humanitarian financing last September — as long as the U.S. kept its side of the bargain. The U.N. target is for developed economies to honor the global commitment of devoting 0.7% of their annual income to aid. But the U.S. itself is below a third of this benchmark — half the current global average and a third of the U.K.’s.

I have often said that if you look at the statistics, you get depressed, but if you meet the people — like those I met in South Sudan — you have hope. We must continue to help provide these people with the assurance that the United States will respond, and rescue them, in times of crisis.

The impact of these cuts would be swift, devastating and felt for years to come. They would imperil lives and the course of global stability. If this budget were to go through, America would not only be seen as responsible for widespread suffering. It would, as far as humanitarian affairs are concerned, relegate itself to the second division — a declining power unable to see beyond its own nose. It should seek to disprove the global impression that it has lost not just its heart, but also its way. 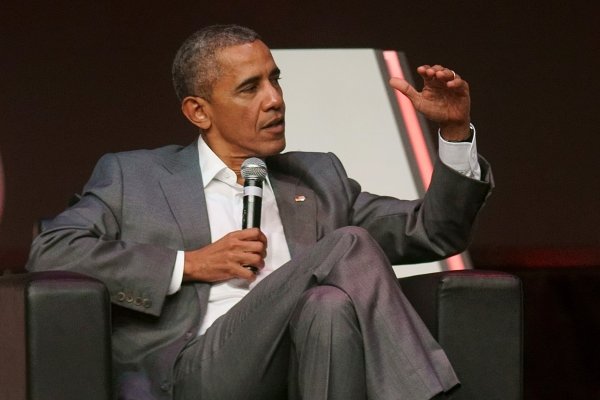 Obama Warns Against an 'Aggressive Kind of Nationalism'
Next Up: Editor's Pick