Louisiana Rep. Clay Higgins has removed a controversial video of himself inside a gas chamber at Auschwitz-Birkenau Memorial after he was accused of politicizing a genocide.

“My message has caused pain to some whom I love and respect. For that, my own heart feels sorrow,” Higgins said in a statement Wednesday. “Out of respect to any who may feel that my video posting was wrong or caused pain, I have retracted my video.”

The Republican congressman posted a five-minute video to YouTube over the Fourth of July holiday weekend that he narrated partially from within a gas chamber at the Auschwitz-Birkenau Memorial and Museum in Poland.

“It’s hard to walk away from the gas chambers and ovens without a very sober feeling of commitment, unwavering commitment, to make damn sure that the United States of America is protected from the evils of the world,” Higgins says in the narration.

He also says gas chamber killings show why the U.S. military “must be invincible.”

The video ricocheted across the internet, causing immediate backlash. The Auschwitz museum condemned Higgins’ actions, tweeting Tuesday that “there should be mournful silence” inside the gas chamber and “it’s not a stage.” It also tweeted an image of a sign at the entrance to the gas chambers asking visitors to remain quiet.

Anti-Defamation League CEO Jonathan Greenblatt criticized the video as well, saying that the memory of what happened at Auschwitz should remain apolitical.

“As a site for reflection, one that often evokes deep personal pain for survivors and their families, Auschwitz should never be politicized or used as a platform for giving personal views,” said Greenblatt. “We hope Congressman Higgins will realize the pain and hurt he has caused, and that, in doing so, he will remove his video from circulation.” 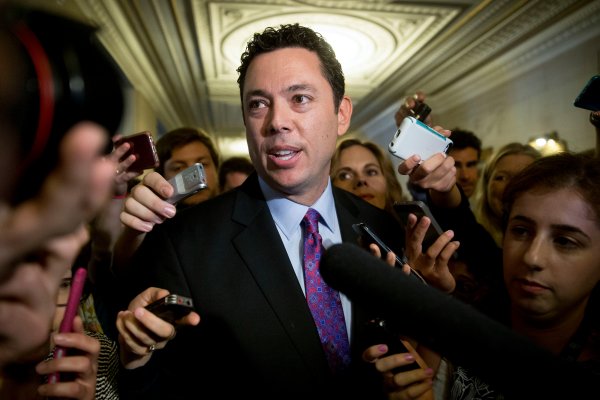 Jason Chaffetz Says He's Quitting Congress to 'Get Off the Crazy Train'
Next Up: Editor's Pick