During his New Year speech, Kim Jong Un declared that North Korea had “entered the final stage of preparation for the test launch of an intercontinental ballistic missile (ICBM),” adding that it would provide “a powerful military guarantee for defending the destiny of the nation.” Like his father before him, the 33-year-old dictator evidently believes that a nuclear-armed ICBM safeguards him from the sort of Western-backed regime change that toppled Iraqi dictator Saddam Hussein and Libyan despot Muammar Gaddafi.

On Tuesday, Kim presided over the firing of an ICBM that soared at an altitude of 1,731 miles, for 580 miles, before crashing into the Sea of Japan. Experts posit that such a rocket, which Pyonyang calls a Hwasong-14, could potentially travel 4,100 miles, technical wrinkles not withstanding. That puts Alaska within striking range.

Afterward, North Korean state television boasted that the regime had, in an instant, become “a full-fledged nuclear power that possesses [a] powerful inter-continental ballistic rocket capable of hitting any part of the world.” North Korea’s official news agency KCNA quoted Kim as saying that the July 4 launch formed a “package of gifts” to the “Yankies” on their Independence Day. In a statement conceding that the launch was indeed of an ICBM, U.S. Secretary of State Rex Tillerson condemned “a new escalation of the threat to the United States, our allies and partners, the region, and the world.”

According to IHS Jane’s analyst Karl Dewey, the launch has bought Kim time, giving decision-makers in Washington “reason to pause for thought” before deciding to strike the communist regime.

The launch also shows that U.S. President Donald Trump’s bluster has had no effect. After Kim made his New Year pronouncement about testing an ICBM, Trump tweeted: “It won’t happen!” Then, in April, Trump dispatched the Carl Vinson U.S. Navy strike group to the Korean peninsula in a show of force, warning of a “major, major conflict” if North Korea didn’t denuclearize. Kim kept on testing missiles. After Tuesday’s successful launch, Trump was reduced to musing: “Does this guy have anything better to do with his life?” He then added: “Perhaps China will put a heavy move on North Korea and end this nonsense once and for all!”

There has been a tightening of U.N. sanctions enforcement at the 880-mile shared border that China shares with North Korea. When G20 leaders meet in Hamburg on Friday, it’s also likely that Chinese President Xi Jinping will be encouraged to squeeze further. But Beijing will never foment the collapse of the regime. It is unwilling to deal with the resulting flood of famished refugees that will pour over the border in the event of Kim’s demise. More importantly, it has no wish to see a U.S.-allied, unified Korean peninsula ruled from Seoul, potentially bringing American troops right up to its doorstep.

Military options remain a last resort for myriad reasons: U.S. allies South Korea and Japan — which together host more than 60,000 American troops, as well as many thousands more expatriate U.S. citizens — are within range of Pyongyang’s conventional and nuclear arsenals. And there is no guarantee that a preemptive strike could knock out Kim’s weapons completely. “Military action just isn’t feasible — that’s the bottom line,” says Delury. “It just doesn’t pass any cost-benefit analysis.”

The last option is to negotiate. In his statement Tuesday, Tillerson reaffirmed: “We will never accept a nuclear-armed North Korea.” But facts may have surpassed his resolve. There are also signs that something may have shaken loose on the Pyongyang side. On Tuesday, KCNA also quoted Kim directly as saying that North Korea would never consider putting its nukes up for negotiations — unless “U.S. hostile policy and nuclear threat to the [North Korea] are definitely terminated.”

Delury spies a possible veiled offer in that statement, calling it “one of the strongest signals directly of Kim Jong Un saying that he will discuss denuclearization.” But Pinkston warns that caving in to North Korean demands “validates their whole project and program and activities.” He says: “It’s nerve-wracking but the rest of the world should make them feel less and not more secure.”

Indeed, engaging with a regime that, according to a 2014 U.N. report, inflicts “crimes against humanity” on its 25 million citizens is a quandary. As is what the international community is willing to put on the table. On Tuesday, Moscow and Beijing jointly backed a “double freeze” — North Korea freezes its missile and nuclear program in exchange for a freeze in large-scale U.S.-South Korea military exercises, which Pyongyang regards as a dress rehearsal for invasion.

“A ‘double freeze’ would be the most obvious first step for negotiations,” says William Choong, Shangri-La Dialogue senior fellow for Asia-Pacific security at Singapore’s International Institute for Strategic Studies.

Delury is optimistic, regarding the successful ICBM test launch as “a pivot point” from Kim’s perspective.

“They have a new level of security they feel with the deterrence capability,” he says, “so they may be willing to negotiate certain compromises.” 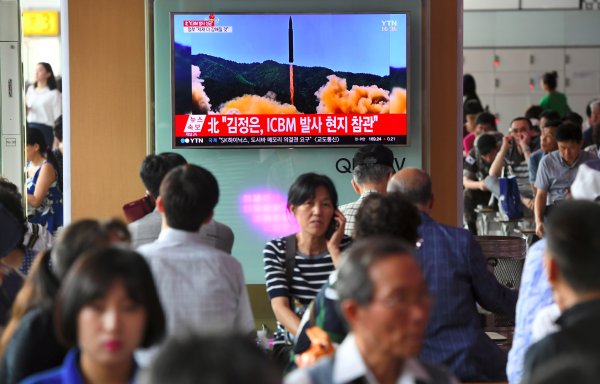 North Korea Says It's Tested an ICBM. Here's Why That's a Big Deal
Next Up: Editor's Pick