Chestnut ate 12 more hot dogs than runner-up Carmen Cincotti, retaining his championship title from last year. The number also broke the contest record of 70 dogs in 10 minutes, set by Chestnut himself during the 2016 competition.

“I’m really happy I got this win,” Chestnut said, gripping the Mustard Belt, “I slowed down way more more than I wanted to, I definitely have room for more … I’m looking forward to next year.”

The professional competitive eater from California had won the well-known contest for eight years in a row beginning in 2007, until Matt “The Megatoad” Stonie ended his run in 2015 with a surprise victory. Stonie came third this year by eating 48 dogs.

In the women’s contest, Miki Sudo came in first place for the fourth straight year, consuming 41 frankfurters in 10 minutes.

Chestnut and Sudo each competed with more than a dozen participants, who earned their seats from regional qualifying events. Both champions will leave with a prize of $10,000.

Thousands came to watch the contestants scarf down hot dogs and buns on the signature blue-and-yellow stage, led by an hour-long musical and dance pre-event performance.

Many people wore hot dog-shaped foam hats and held signs with messages like “Bun Stuff” to cheer for the eaters. 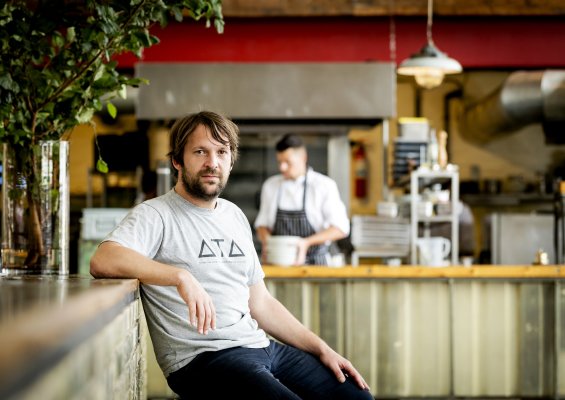 Chef René Redzepi Wants You to Forage for Your Own Food
Next Up: Editor's Pick