North Korea Says It's Tested an ICBM. Here's Why That's a Big Deal

North Korea claimed Tuesday to have successfully tested an intercontinental ballistic missile (ICBM) for the first time, a development which if true represents a significant advance in the hermit kingdom’s missile program.

State media said North Korea was now “a full-fledged nuclear power that has been possessed of the most powerful inter-continental ballistic rocket capable of hitting any part of the world,” the BBC reported.

The missile landed in the Sea of Japan, and the Japanese government said that the missile launch was a clear violation of UN resolutions as the projectile landed in their Exclusive Economic Zone, reports the Telegraph. South Korean President Moon Jae-in convened a national security council meeting following the test, and said his military would investigate reports it was an ICBM.

U.S. President Donald Trump tweeted about the test early Tuesday morning. “Does this guy [North Korea leader Kim Jong Un] have anything better to do with his life?” he tweeted. “Hard to believe that South Korea and Japan will put up with this much longer. Perhaps China will put a heavy move on North Korea and end this nonsense once and for all!”

Here’s what to know about ICBMs, and why a successful test would be such a big deal:

What is an ICBM?

ICBM stands for Inter Continental Ballistic Missile, a powered and guided projectile able to carry a warhead over 5,600km through air or space. The key thing that distinguishes it from other missiles is the extraordinary reach, which could allow North Korea to attack targets far beyond its immediate borders.

North Korea has had a number of ICBMs under test, according to the U.S.-Korea Institute at Johns Hopkins and the media is widely reporting that the rogue state used a Hwasong-14 in today’s exercise. An announcement on North Korea state television said that the projectile flew 933km after reaching an altitude of 2,802km, which the Guardian say roughly matches with analysis by South Korea and Japan.

The distance led the U.S. to say that the missile was of intermediate range and did not pose a threat to the mainland, the BBC reported. However, the altitude of the test led arms control specialist Jeffrey Lewis to tweet: “That’s it. It’s an ICBM. An ICBM that can hit Anchorage [Alaska] not San Francisco, but still.”

Only the U.S., Russia and China have land-based missiles of this range. The U.K. do have missiles of a similar range in their Trident nuclear program that are submarine-launched.

Why is it a big deal?

Because it means North Korea could potentially hit the United States. David Wright, co-director of the UCS Global Security Program says the missile could have the potential to travel 6,700km. “That range would not be enough to reach the lower 48 states or the large islands of Hawaii,” Wright wrote, “but would allow it to reach all of Alaska.”

It is North Korea’s fourth ballistic missile test since May, when South Korea’s Moon Jae-in became President, but would be its first known test of an ICBM. Bloomberg reports that North Korea first began missile testing in 1976, using material from the Soviet Union, and has slowly developed the range of its missiles ever since.

Experts doubt however whether North Korea has the technology to develop a warhead or successfully bring it back into the atmosphere. North Korea first tested nuclear weapons in 2006 and has claimed to have successfully tested a hydrogen bomb in 2016. However, Pentagon spokesman Peter Cook said last year: “The United States has not seen North Korea demonstrate a capability to miniaturize a warhead. We still feel confident that we can deter and respond to a missile threat from North Korea.”

What defenses does the world have?

The Pentagon’s Missile Defense Agency has been tasked with developing, testing and fielding systems to defend the U.S. and its allies against ballistic missiles, and boasts ground, sea and space-based sensors to detect missiles and ground and sea-based missiles that can intercept enemy projectiles using direct force or explosions.

In June it worked with the Japanese Ministry of Defense to test one of these missiles, the SM-3 intercepter. However, it failed to intercept its target. Raytheon, the company which produces the SM-3 intercepter, says it uses “sheer force, rather than an explosive warhead, to destroy its target”. But a video posted by the Union of Concerned Scientists back in 2000 doubts that this technology will ever be effective because those who launch the missiles can easily develop technologies to confuse the intercepting missile.

Last year, Reuters reported that the U.S. activated an $800 million missile shield in Romania. U.S. Deputy Defense Secretary Robert Work said at the time that the U.S. will continue to defend NATO “as long as Iran continues to develop and deploy ballistic missiles”.

Closer to North Korea, the U.S. has an anti-ballistic missile system in South Korea that can intercept short, medium and intermediate range missiles known as THAAD. Bruce Bennett of RAND Corporation told The Atlantic that THAAD only has a range of 200 km. “So they can’t even really cover Seoul with that battery, let alone something flying out over the Pacific,” he added. 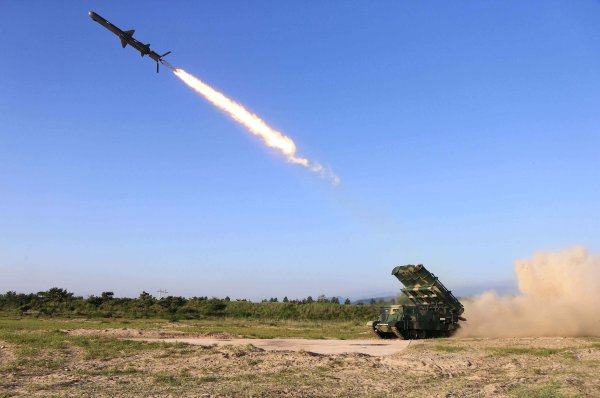