President Donald Trump posted a video to Twitter on Sunday that depicts him punching a physical representation of CNN in the face, the latest escalation in his ongoing war against the news media and one that raised the specter of actual violence.

The video posted Sunday morning to Trump’s Twitter feed is of an actual 2007 staged spectacle in a wrestling arena, when Trump, then a reality TV star, brought WWE head Vince McMahon to the ground in their “battle of the billionaires.” But the video was edited with CNN’s logo imposed on McMahon’s face.

In the video, Trump spends about 10 seconds punching the opponent with the CNN logo before the now-President walks away, seemingly unscathed.

The video concludes with an image similar to CNN’s logo, but with the acronym FNN — representing “Fraud News Network,” Trump’s latest moniker for one of his most frequent media targets.

Thomas Bossert, a homeland security adviser to Trump, was asked about the tweet on ABC’ News’ This Week with George Stephanopoulos. “My first reaction to that tweet would be the same as any of the President’s tweets: there’s a lot of cable news shows that reach directly into hundreds of thousands of viewers and they’re really not always fair to the President,” Bossert said.

“No one would perceive that as a threat, I hope they don’t,” Bossert continued. “But I do think that he’s beaten up in a way on cable programs that he has a right to respond to.”

But other reactions to the tweet, which came just days after the Trump attacked MSNBC’s Morning Joe co-hosts Joe Scarborough and Mika Brzezinski, included concern for the safety of reporters.

“It is an incitement to violence,” Republican strategist Ana Navarro, who is a commentator on CNN, said on This Week. “He is going to get somebody killed in the media.”

CNN at first responded on Twitter by simply quoting White House spokeswoman Sarah Huckabee Sanders, who said only days earlier that Trump “in no way form or fashion has ever promoted or encouraged violence.”

The cable news network later called it “a sad day when the President of the United States encourages violence against reporters.

Brian Stelter, CNN’s senior media correspondent, noted on Twitter that the video had surfaced on a Reddit thread days earlier, with the caption “Trump takes down fake news.” 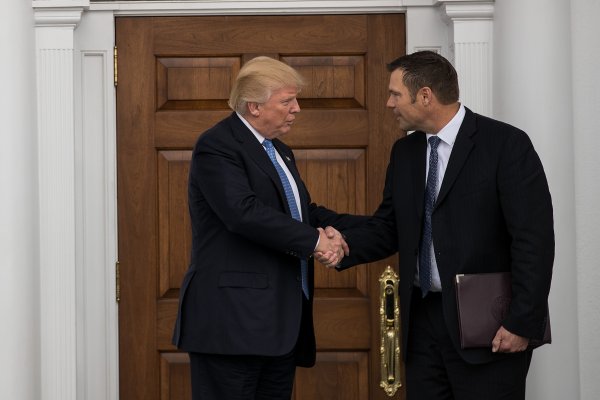 Trump Questions States Refusing to Hand Over Voter Info
Next Up: Editor's Pick