After fifteen months as a refugee in Greece, Nour Altallaa has come to recognize many of her fellow Syrians as they attempt to obtain asylum in Europe. Fellow passengers on the overstuffed rubber raft that took her from Turkish shores to the Greek Islands reappeared in the succession of refugee camps, hotel rooms and apartment buildings that she called home. She ran into these neighbors while waiting in line to register for her refugee papers, and while recovering from the birth of her daughter, now eight months old, at a Greek hospital.

By the time she reached the final stop on her Greek odyssey on June 12, at the Greek Asylum Services office in Athens where she and her family were to find out — finally — which European country will let them in, she felt she could recognize almost every person in the packed waiting room. Then her eyes landed on a figure who was familiar in a different way, and memories of her hometown, Deir ez-Zor, came flooding back.

“Miss Mariam?” she ventured hesitantly, approaching a striking woman with jet-black hair cascading down her back, an anomaly in a room where most heads were covered. Mariam Musa, 38, swiveled in her folding chair and took in Altallaa, clad in tight jeans, a butterfly headscarf and leopard print sneakers, with a quizzically raised eyebrow. “It’s Nour,” said Altallaa, 23, “I was in your art class, in Deir ez-Zor.” Musa broke into a smile.

Within moments the two women were engrossed in conversation. They reminisced of a time, not so long ago, when the city that is currently a stronghold for ISIS was just an ordinary Syrian town where high school students took art classes and women, even practicing Muslims, could wear their hair as their consciences dictated, and not as the fundamentalist group demanded. “The world is so small,” marveled Altallaa, “to run into my high school art teacher here.” Musa laughed. “I’ve seen at least six of my former students in waiting rooms like these.”

Quickly the conversation turned to the basics of the refugee experience in Greece: the boat ride, the smuggler’s fees, the endless litany of camps, interview dates, and finally, “Do you know which country you are getting?” Both women fled Syria in early 2016, encouraged by the successes of other refugees who had managed to hopscotch northward from Greece to obtain asylum in Germany, Sweden and the wealthier nations of northern Europe. But by the time they arrived — Altallaa newly married and pregnant, Musa traveling with her sister’s family — the borders had slammed shut, trapping them in Greece, along with some 60,000 other asylum seekers fleeing the wars of the Middle East and Afghanistan. Soon after they arrived, the European Union settled on an agreement to ease Greece’s burden by divvying up the asylum seekers throughout the economic block. But the slow moving gears of Greek and European bureaucracy mean that some 15,000 Syrians are still waiting to find out their fates. About 60 of them were in the Asylum Center that day.

“I am a bit afraid to know which country we will get,” Altallaa confessed to her former teacher. “It will be the country we will live in, and spend our lives in. At the same time, I am excited. I hope it’s a good country.” A “good” country, she explained, would be “Sweden, Holland, Belgium or Germany. My friends live there, and they say that they’re good for refugees. The services are good, education, work — they are good on all fronts.”

Having family and friends already there is important, but, she admits, one of the key issues that divides “good” countries from “bad” ones is the amount of living allowance refugees are allotted while they get their new lives started, before they can find jobs. Some countries only offer a pittance, barely enough to buy food when they have so many other expenses. “Any refugee in Greece owes a debt for the smuggler and the costs of the journey, so when you calculate it, it won’t be enough with such income. Do you want money for food, money to pay the debt or to send money to the family back in Syria?”

Musa nodded. She was at Asylum Services to renew her refugee ID, a formality required every six months. She had no idea when she would find out where she would be relocated to, but she was hoping for Germany. She has been taking German courses online for the past several months, and already feels comfortable with the basics. “My favorite thing to say in any language is ‘I Love You,’” she said. “So the first thing I learned to say in German was ‘ich liebe dich.’”

All the refugees nervously waited their turns, attempting to apply some kind of logic to the assignments. According to the refugee rumor mill, relocation interviews tend to be grouped by destination (though authorities have never confirmed this is the case). One week it will be Holland, the next might be Portugal. Since it was a Monday morning, the start of a new week, no one knew what to expect. But last week it was mostly France, said Musa. Altallaa shivered. “I will be sad if we get France,” she said. “The way they treat people, especially women and girls with hijab, is not good. The niqab is banned,” she added, referring to the full-face veil some conservative women wear.

To pass the time, Musa filled Altallaa in on the fates of other former students she had encountered in Greece. She was always glad to see them, she said, not because they reminded her of her days teaching art, but because Deir ez-Zor under ISIS had become a place of horror.

“It is unlivable. There is no education, no art, no reading, nothing,” Musa said, pinching her nose to stop from crying. “Those who are there now are growing up in the age of ISIS, so they aren’t learning to see the world in the good light. Instead they are growing up brainwashed.” ISIS, she said, is defiling her religion. “They say they are speaking for Islam, but instead they are making everyone hate Islam. I hope God forgives me, but they really make you hate religion.” Altallaa nodded in agreement. There are almost no Syrians left in her neighborhood, she said. Instead the town is filled with foreigners — Tunisians, French, Algerians and Egyptians — who flocked to fight for ISIS.

Finally, Altallaa’s family was called. She said goodbye to Musa, wished her luck, and bundled her sleeping daughter into her arms. She and her husband walked down the corridor and into the office where a translator read them their fate. Nour was beaming when she came out. “It’s Germany,” she said. “It’s what we wanted.”

Musa is still waiting for her appointment, and still hoping for Germany. The deadline for the E.U. relocation scheme to end is September, but officials from the International Organization for Migration say the deadline is likely to be extended, to December at least. Better than waiting, says Musa, would be if Syria somehow found peace after over five years of war. “For sure, I would love to go back to Syria. If the war were over and ISIS was gone, I wouldn’t stay in Germany even one year.” 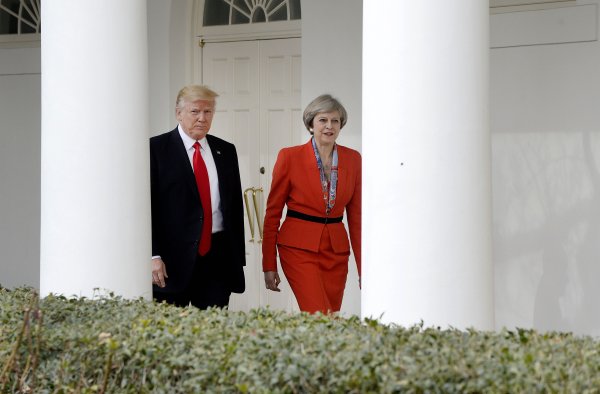 British Protesters Rally at Rumors of a Surprise U.K. Visit by Donald Trump
Next Up: Editor's Pick