There Has Never Been 'Normal' Under President Donald Trump

Forget about normal. That’s a long gone concept in the era of President Donald Trump. In the face of this president’s chronic moral withering, we have no choice but to expect the worst from him, and instead strive for decency among ourselves.

During his 1999 presidential campaign, George W. Bush delivered a speech with a famous and often-quoted line about what he called the “soft bigotry of low expectations.” He forcefully argued that it was discriminatory to not expect all children, of all races and all backgrounds, to be capable of the same level of academic achievement. Three days into his presidency, Bush pushed bipartisan legislation called No Child Left Behind as a policy remedy for the achievement gap.

Like Trump, Bush won the electoral vote but lost the popular vote. But whereas that seems to fill Trump with vindictive rage, it helped Bush begin his presidency with a healthy measure of humility. For his first major initiative, he made a bipartisan push to help children. By mid-June of the first year of his presidency, the Senate overwhelmingly passed Bush’s education bill, with only eight “nay” votes.

Contrast that with Donald Trump, whose unseemly, twisted, and inappropriate behavior is the dominant narrative of his presidency.

I confess that I have approached Trump with low expectations, I expected no moral leadership from a man who casually bragged about sexual assault and racially insulted a judge. And yet I find myself consistently horrified that he exceeds even my worst fears.

Something is more than a little off when the leader of the free world cares more about what cable television is saying than he does making life better for the men and women who put him in office. Finding new and creative ways to insult his many, many detractors defined his campaign, and it continues to define his first 161 days in the Oval Office. The era of normalcy has come and gone.

Until Trump came along, I didn’t realize how much depends on those norms. They are what kept the people who came to Washington to occupy positions of power from abusing their privilege. At the end of the day, it was those norms, not actual laws, that prevented elected and appointed officials from using power for personal gain, be it encouraging patronage of the Commander-in-Chief’s hotel or his daughter’s fashion label or subverting a taxpayer funded perch.

The dignity of the office reflected our country’s role in the world as an imperfect force, but one always striving for a basic idea of right over wrong.

The scariest part of Donald Trump’s public role is that the norms of governance and social mores, big and small, for better but mostly for worse, have never applied. Now that he’s President, norms no longer apply anywhere — in America, or in the world.

It’s heartening that there’s bipartisan outcry when the leader of the free world uses his Twitter platform to disparage a female cable news host. (I’m a regular panelist on Morning Joe.) There should be an outcry when our President behaves in a way that would get a man fired in any semi-functional workplace.

At times like these, it’s crucial to remember that the president is not, in fact, the most powerful or important person in America. He works for us, and we retain control of and responsibility for our destinies. In far grimmer eras of American history — slavery, internment, the Jim Crow days in the deep South — millions of men and women in this country found a way to conduct themselves with dignity, no matter how depraved things got at the top of the hierarchy. And their forceful dignity and refusal to give up on the American ideal are what makes me hopeful that this, too, will pass.

Trump may despise women who don’t fit his notions of submissiveness or physical attractiveness. Trump may demonize immigrants and Muslims, blaming them for economic malaise or terror. Trump may hate the weak and the poor, mistaking his inherited wealth for intrinsic worth and achievement. Trump may want to cripple the press to prevent it from showcasing his disastrous incompetence and viciousness. But we, the American people, don’t have to go along with any of that. We can reflect the best of America, even when the President doesn’t. 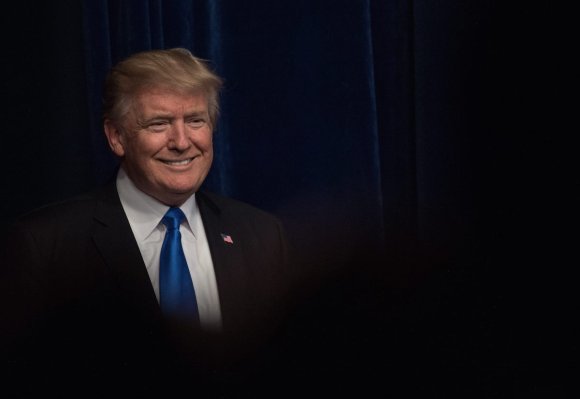 Where President Trump's 'Face-Lift' Tweets Fit in Presidential History
Next Up: Editor's Pick