Xi Jinping began the second of his three-day visit to Hong Kong Friday with a troop inspection at one of the territory’s military bases, while police remain on high alert and have warned pro-independence activists not to go ahead with a scheduled rally.

The Chinese leader is in Hong Kong to commemorate the 20th anniversary of China’s resumption of sovereignty over the former British colony.

He inspected troops at the Shek Kong Barracks and then visited a nearby youth training camp operated by local police.

Xi’s visit comes at a time when resentment at Beijing’s growing encroachment on Hong Kong, particularly among the young, is high. Although central areas of the city are on lockdown, small acts of defiance have taken place.

More than two dozen protestors — including prominent young democracy activist Joshua Wong and lawmaker Nathan Law — were released on bail between Thursday evening and Friday morning, after more than a day in police custody following their brief scaling Wednesday evening of a symbolic sculpture given to Hong Kong by Beijing.

A rally “mourning the 20th anniversary of Hong Kong’s fall” by the pro-independence Hong Kong National Party is scheduled to take place Friday evening at the Kowloon waterfront. This comes despite an explicit ban on the gathering by police, which informed the group in a letter that its principles are unconstitutional in Hong Kong, according to photos of the letter uploaded to the group’s Facebook page.

Meanwhile, graffiti reading “Hong Kong has fallen for 20 years” has reportedly appeared in numerous locations across town. Separatist group Hong Kong Indigenous said on its Facebook page Thursday night that one of its members was arrested in relation to the case. The group further accused the police of using “white terror” tactics of “collective punishment,” as the member’s father and brother were said to have also been arrested.

Hong Kong police confirmed to TIME that three individuals aged 25 to 59 have been taken into custody for criminal damage, in relation to three road signs defaced with graffiti.

Xi will be attending a variety show celebrating the anniversary in the evening. On Saturday — July 1, the anniversary of the handover — he is expected to swear in the territory’s new leader and her cabinet, before visiting the construction site of Hong Kong-Zhuhai-Macau Bridge on his way to the airport.

He is slated to depart just hours before an annual pro-democracy and freedom protest march begins. 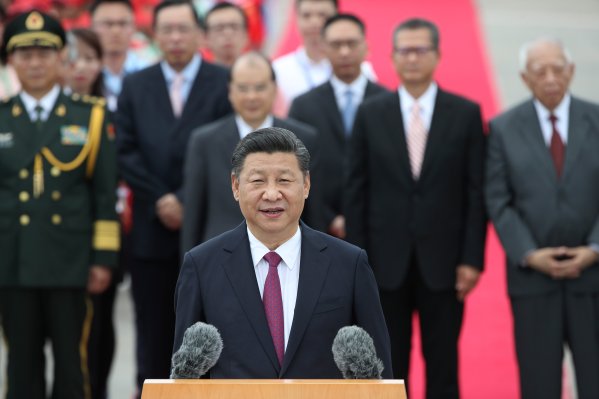 Xi Jinping Lands in Hong Kong for the Handover Anniversary
Next Up: Editor's Pick