Pro-independence banners, as well as the colonial flag, were carried by mostly youthful demonstrators who braved sweltering summer temperatures to join an annual protest march, timed to coincide with the anniversary of China’s resumption of sovereignty over the politically divided former British colony.

Marchers began gathering in the afternoon in the city’s downtown Victoria Park in uncomfortable proximity to an outdoor exhibition — organized by a Who’s Who of pro-China grandees — touting China’s myriad achievements. The exhibition’s centerpieces were an unused Chinese space rocket and a model of the Shenzhou manned spacecraft.

Held every year on this politically sensitive anniversary, the march is both a protest against Chinese power and a show of support for an array of liberal causes. This year — the twentieth since the resumption of Chinese sovereignty — the issues ranged from sustainable development to fairness for ethnic minorities and equal rights for the LGBT community.

“The major issue I care about is freedom of speech. We want the Hong Kong government to listen more,” said Teresa Chung, a primary school teacher and protester in her thirties.

The night before the march, members of the Hong Kong National Party gathered at the Baptist University campus, chanting “No Chinese colonization” and “Hong Kong independence,” as well as “We are not Chinese, we are Hongkongers.”

Saturday’s demonstration began just hours after Xi concluded his three-day tour of the territory. Earlier in the morning, he officiated at the raising of the Chinese flag and the inauguration of Hong Kong’s new leader Carrie Lam.

The official ceremonies were marred by scuffles near the venue, when a group of some 20 democracy activists was attacked by a loyalist mob. Prominent democracy activist Joshua Wong was handcuffed and another activist, Avery Ng, accused officers of roughing him up in the back of a police vehicle.

In his speech, Xi took stern aim at growing calls in Hong Kong for greater political freedom and independence.

“Any attempt to endanger China’s sovereignty and security, challenge the power of the central government … or to use Hong Kong to carry out infiltration and sabotage activities against the mainland is an act that crosses the red line,” he said, echoing a longstanding party attitude toward Hong Kong as a wayward, disobedient enclave and a gateway for the spread of anti-Communist ideas.

Lam echoed his warning in her speech, pledging to counter “any acts that will undermine the country’s sovereignty, security and development.”

Jeffrey Wasserstrom, Chancellor’s Professor of History at the University of California, Irvine, told TIME that such frank statements painted a “worrisome” picture for Hong Kong.

“When taken together, the more direct statements, the greater pomp, and the tighter security combined signal a significant ramping up of the intensity and boldness of Beijing’s efforts to rein in [Hong Kong’s] ability to function as a city that is much freer — not just slightly freer — than any mainland metropolis,” he said.

Meanwhile, a foreign ministry spokesperson in Beijing exacerbated Hongkongers’ fears Friday when he told reporters at a daily briefing that the Sino-British Joint Declaration, the 1984 treaty that determined Hong Kong’s post-1997 status, was now merely “a historical document that no longer has any realistic meaning.”

The proposition was quickly refuted by the British Foreign Office, which told Reuters that the declaration “is a legally binding treaty, registered with the U.N. and continues to be in force.”

Hong Kong University professor of law Michael Davis said “The Chinese position is not sustainable in international law. They have a treaty obligation … The only way out of that would be if they choose to breach the treaty.”

China’s apparent willingness to renege on its obligations to Hong Kong was discussed by Chris Patten, Hong Kong’s final British governor, when he spoke to TIME last month.

“Whether or not China keeps its word to Hong Kong on Hong Kong’s way of life in the next 30 years is going to be really significant,” he said. “Not just because of the issues that Hong Kong represents in the 21st century, but because people say, ‘You can always take China at its word.’ Well, can you?” 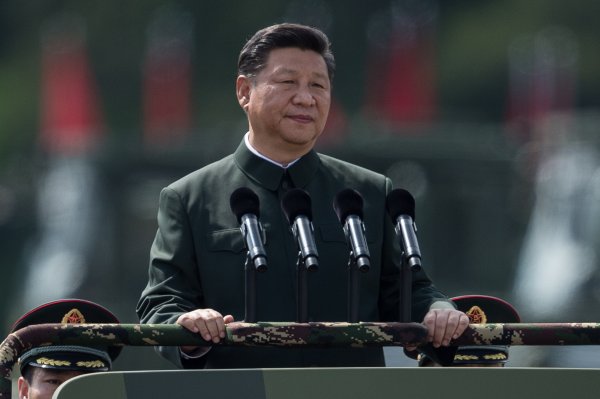 Hong Kong Police on High Alert During Xi's Visit
Next Up: Editor's Pick