If you’ve ever heard a sudden loud noise in your sleep that turns out to be imaginary, you’re not losing your mind. In fact, you’re among the roughly 10-15% of people who have experienced Exploding Head Syndrome (EHS), a phenomenon that strikes as a person is falling asleep. Here’s what you need to know about the condition.

EHS starts when you hear a loud noise, ranging from the sound of fireworks and gunfire to thunder and lightning. It’s generally painless and lasts just a few seconds. “There’s this sudden crescendo of noise, then a profound and jarring explosion of sound, electrical fizzing and a bright flash in my vision, like someone has lit a spotlight in front of my face,” an EHS sufferer explained to the BBC.

People respond to EHS differently. Some think they’ve heard a real event and wake up confused, looking around for the source of the noise. Others who have it more frequently may find it anxiety-inducing and start avoiding sleep, or feel panicked when they go to bed.

Some people have even incorporated the episodes into conspiracy theories. “Some individuals believe they’re not natural events, but are essentially caused by malevolent government agencies,” says Brian Sharpless, an associate professor at the American School of Professional Psychology at Argosy University, Northern Virginia and author of the recent book Unusual and Rare Psychological Disorders. Sharpless has led studies on EHS. “I’ve received a number of phone calls from conspiracy theorists who don’t believe the scientific explanations.”

MORE: The TIME Guide To Sleep

It may stem from problems with the brain shutting down

Because EHS occurs when a person is falling asleep, researchers think it may be connected to the brain having problems shutting down.

“The way I usually describe EHS is by considering the brain to be a computer,” says Sharpless. “You go through a series of steps when you’re shutting down your computer, and your brain does the same thing. As you go to sleep, your auditory and visual neurons are normally inhibited. What we think happens during EHS is that instead of shutting down, these neurons fire all at once. When they do they, they create a perception of sound, which is why sufferers hear the loud noises.”

Sharpless found that EHS is connected to isolated sleep paralysis—a condition in which a person wakes up unable to move or speak for a few minutes at a time. In a study of 211 undergraduate students, Sharpless and his team found that the overall EHS rate was 18%, and 37% of those with EHS also experienced sleep paralysis.

EHS is not uncommon

EHS has a long history in medical literature, and the first reference dates back to 1870. “I think it’s actually not uncommon,” Sharpless says. “For most people though, it happens rarely, and there’s only a relatively very small number of people who experience it to the extent that it’s problematic.”

The syndrome was initially thought to occur most commonly in women and those age 50 and over, but in his research, Sharpless has found that about 13% of undergraduates have experienced it at least once. However, more research is needed to determine which groups of people are more likely to be sufferers and how prevalent it is.

There isn’t much you can do about it

There are no well-established treatments for EHS, and there has never been a controlled trial for it, Sharpless says. “It’s probably not shocking to hear that there’s not a lot of money to study EHS and that many doctors have never even heard of it,” he says.

The best piece of advice for sufferers is “to not freak out and to realize that it’s a natural event,” Sharpless says. Those who experience EHS to a high degree, where its frequency or intensity is particularly troubling, may be advised to use antidepressants, calcium channel blockers (which are often used with headache disorders) or an anti-seizure medication.

“In general, anytime you have sleep disorders, one of the best and easiest things to do is to regulate your sleep by going to bed and waking up at the same time and to avoid using alcohol or caffeine prior to bed,” Sharpless says. “Simple things like that can really lead to a reduction in episodes. If it is EHS, it’s not dangerous, and is just one of those strange experiences you can tell your boyfriend or girlfriend about when you wake up.” 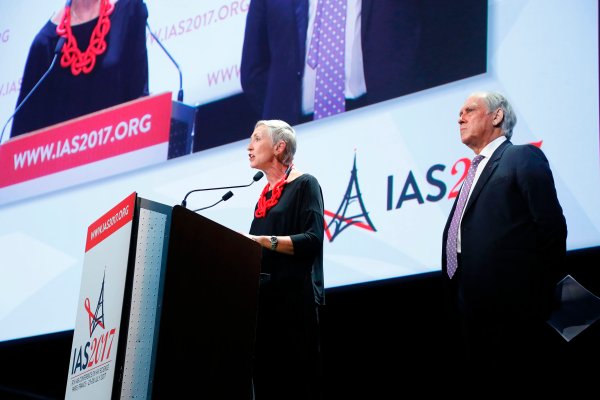 Child With HIV Has Been in Remission For Nearly 9 Years Without Drugs
Next Up: Editor's Pick