California's Drought Is Over. But This Wildfire Season Will Still Be Severe

Hundreds of thousands of acres and countless structures have been destroyed in recent years in California as intense fire seasons have hit the state each summer.

And while a wet winter that dampened the state’s six-year drought may inspire hope that this fire season could be less severe, experts say that’s not the case.

With new water comes new growth, creating weeds and dense grasses that can get up to five feet tall. But as the grass dries out this summer, it becomes prime fuel for the aggressive and fast-moving fires that have become so familiar in the Golden State.

“We just can’t win,” said Lynne Tolmachoff, spokesperson for the California Department of Forestry and Fire Protection, or Cal Fire.

Eight wildfires are currently burning thousands of acres in California. So far, the fires this season have not been as destructive — or as deadly — as ones in year’s past. (Though in a San Luis Obispo, Calif., fire Monday, Big Bang Theory star Johnny Galecki’s ranch was burned down, along with several other structures.)

It’s anticipated that conditions this year will be “not unlike what we saw last year,” said Max Mortiz, a fire ecology expert and associate cooperative extension specialist at the Department of Environmental Science, Policy and Management at the University of California, Berkeley. And Tolmachoff said it’s likely more homes and structures will be destroyed as the season gets more intense.

“The potential is always there, unfortunately,” she said.

In 2016, hundreds of homes were destroyed and more than 100,000 people were ordered to evacuate as officials decried the severe season as the new normal for California. Between Jan. 1 and June 25 this year, 2,135 fires have burned 20,249 acres in California, according to data from Cal Fire. That’s slightly more than the same time frame in 2016, when 1,750 fires had burned 18,354 acres.

In April, California Gov. Jerry Brown declared the state’s six-year drought was over, issuing an executive order that lifted the majority of drought emergency efforts in most counties in the state. But California still has several of its water restrictions it implemented over the last few years.

“In California, we are always going to have drought,” said Glen MacDonald, the John Muir Memorial Chair of geography at the University of California, Los Angeles. “So we’ve had one good year of precipitation this year. This is no time to relax and exhale and assume that this has passed.”

“This is the same thing with fire,” he said.

The wet winter did increase the snowpack in higher elevations, where Californians are still hitting the slopes even as July approaches. That delays the fire season for those areas — but it will likely return in the later months in the summer as the packs dry up, experts said.

And the state is still experiencing high temperatures — hitting over 100 degrees in some counties this month. California’s climate still dries out during the summer, especially in lower elevations where temperatures continue to rise and vegetation turns into fuel sources for fast-moving flames.

In addition, the drought fueled a bark beetle population that has tens of millions of trees in the state’s Sierra Nevada forests, where snow still tops the mountains. 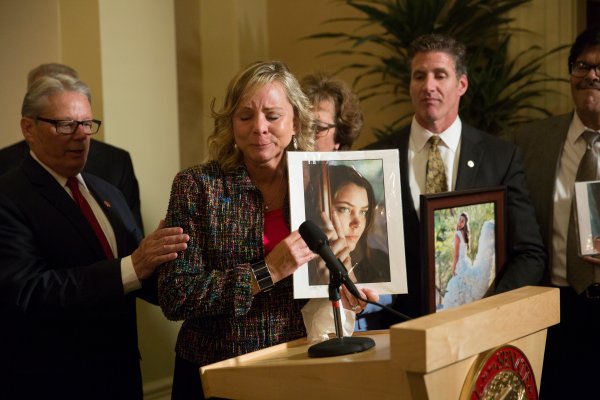 More Than 100 People Have Ended Their Lives Under California's Right-to-Die Law
Next Up: Editor's Pick