Adele Reportedly Tells Fans She Might Retire From Touring

The Grammy winner is wrapping up her world tour with four charitable performances at London’s Wembley Stadium, but it’s possible those are her last concert performances ever. Included in the tour programs for the Wednesday night show was a handwritten note. “I don’t know if I’ll ever tour again and so I want my last time to be at home,” the letter reads, according to fans who shared the note on social media.

“Touring is a peculiar thing, it doesn’t suit me particularly well,” the note continues. “I’m a real homebody and I get so much joy in the small things. Plus I’m dramatic and have a terrible history of touring. Until now that is! I’ve done 119 shows and these last 4 will take me up to 123, it has been hard but an absolute thrill and pleasure to have done. I only ever did this tour for you and to hopefully have an impact on you the way that some of my favourite artist have had on me live.”

She adds: “And I wanted my final shows to be in London because I don’t know if I’ll ever tour again and so I want my last time to be at home. Thank you for coming, for all of your ridiculous love and kindness. I will remember all of this for the rest of my life. Love you. Goodnight for now.”

This isn’t the first time the singer has publicly alluded to retiring from the road. “Touring isn’t something I’m good at,” she told the audience at one of her March shows in New Zealand. “I don’t know if I will ever tour again. The only reason I’ve toured is you. I’m not sure if touring is my bag.”

If this is it, Adele’s final show will be Sunday at Wembley Stadium. 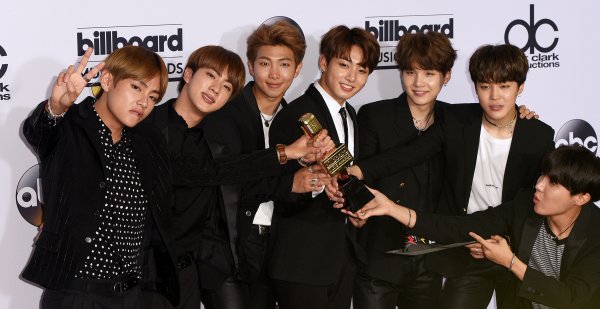 BTS's Rap Monster on the Rise of the Breakout K-Pop Band
Next Up: Editor's Pick