Going After the 'Really Bad Dudes'

As an undocumented immigrant, Jose Almaguer Hernandez lived his version of the American Dream. Married with children in Marietta, Ga., he found steady work, bought a home and paid his U.S. taxes. He was self-employed as a painter, working on the homes of his chiropractor and attorney, among others. His son Daniel, who was born in the U.S., was accepted to Georgia State University, where he majors in criminal justice and recently made the dean’s list.

But without papers, Hernandez, 51, was not able to get a driver’s license in Georgia. So in 2013, after he was pulled over for a broken brake light, he was arrested for driving without a license and detained. Under the Obama Administration, this did not get him sent back to Mexico, even though he had been previously removed from the country in 1990 and was convicted of a misdemeanor battery in 1992, according to federal authorities. With an American child, he was asked instead to check in with Immigration and Customs Enforcement (ICE) regularly, where officers would review his file and grant him temporary permission to stay in the country.

That all changed this year. During a scheduled check-in this March, instead of being released as he’d been in the past, Hernandez was taken into custody. On April 20, he was deported back to Mexico.

In federal deportation statistics, Hernandez will be recorded as a criminal, yet another data point in the fulfillment of President Donald Trump’s campaign promise to rid the country of “really bad dudes” who have been living in the U.S. without documentation. Between Jan. 22 and June 24, 65,704 people were arrested by ICE, a 39% increase compared with the same period in 2016. Of those arrested, 73% were convicted criminals. Trump consistently describes his Administration’s enforcement as a crackdown on criminals preying on Americans. “You have a gang called MS-13. They don’t like to shoot people. They like to cut people,” Trump told a rally in Iowa on June 21. “These are true animals. We are moving them out of the country by the thousands, by the thousands.”

That does not appear to be true. Only 772 people affiliated with MS-13 were among the 9,117 gang leaders, members and associates arrested between Oct. 1, 2015 and June 4, 2017, a period that overlaps with the Obama Administration, according to recent Senate testimony by Homeland Security officials. So far under Trump, fewer gang members or associates have been detained than people with no criminal conviction: a full 27% of those arrested between January and June 2017 committed no other crime than being in the country illegally. But the Homeland Security chief has said that doesn’t mean they’re innocent. “Seventy-five percent are indeed criminals,” said Secretary John Kelly, in an interview with Fox News. “The other 25% are not the valedictorians of their high school class.”

Many of those with criminal records are guilty of low-level, nonviolent offenses, like driving without a license and using a fake Social Security number. (Only 12 states and the District of Columbia give driver’s licenses to immigrants without documentation.) Others find themselves detained because they have failed to report to court. As ICE chief Thomas Homan testified before Congress on June 13, “no population” of immigrants is immune to enforcement. “If you are in this country illegally, and you committed a crime by entering this country, you should be uncomfortable, you should look over your shoulder, and you need to be worried,” he said.

This includes about 70,000 immigrants like Hernandez, who are monitored regularly by immigration authorities. “Check-ins have become quite the dangerous experience for my clients,” says Miami-based attorney Pablo Hurtado. “That’s where we have felt the change in policy the most.”

One of his clients, Victor Arriaga, had an order of removal out against him since the 1990s, but he’d been granted a stay up until March, when he was detained and later deported. ICE says he also had multiple misdemeanor convictions. After being caught driving without a license during a traffic stop for speeding, a Phoenix man, Marco Tulio Coss Ponce, narrowly avoided deportation under President Obama. During an ICE check-in this past May, he was detained and sent back to Mexico. “I understand there are a lot of criminals, but the Latinos that are working with families that are doing right, why not give them an opportunity?” he told TIME.

Others have been detained for deportation after losing court applications for asylum. “They’re criminalizing immigration violations,” says Hiba Ghalib, Hernandez’s attorney, who says she has a Somali client being detained after his plea for asylum was denied. The same happened to Diego Puma Macancela, 19, who was arrested by ICE officials in Ossining, N.Y., hours before his senior prom, after a court denied his asylum application. “We would, of course, welcome our student back for his final exams and graduation next week,” local school superintendent Ray Sanchez said in a statement after Macancela was detained. Instead, authorities deported Macancela, who had no criminal record, to Ecuador. ICE director Homan disputed the claim that he was an innocent in recent House testimony, saying the teen committed a crime by entering the U.S. illegally: “This is a country of laws.”

In the new atmosphere, lawyers and social workers find themselves dealing with clients who worry they can no longer work with law enforcement, even when they are victims of crimes. In Texas, a new state law will allow police officers to ask about immigration status during lawful detainments. Anne Chandler of the Tahirih Justice Center says she’s convinced there are people who aren’t coming forward, even though victims of crime are still eligible for special visas. “I know that there’s a survivor today who is not making the call, or the neighbor is not making the call to 911,” she says. “And I know that because of the phone calls I’m receiving and the client stories that I’m hearing from our attorneys. It’s not speculation.”

Other groups that help crime victims say they no longer tell undocumented callers that working with police will not lead to deportation. “We don’t have the confidence to say that to someone,” says Katie Ray-Jones, CEO of the National Domestic Violence Hotline. “We are saying, ‘Yes, that is absolutely a valid fear. Let’s talk about other options.'”

In Los Angeles, police reported a 10% drop in reports of domestic violence and a 25% drop in reports of rape among the city’s Latinos in the first three months of 2017, compared with the year before. The police department noticed no similar drops among other communities of color. In Houston, police chief Art Acevedo noted a 42.8% decline in rapes reported by Latinos compared with the year before and a 13% drop in all violent crime reported by Latinos as of April. “When you see this type of data, and what looks like the beginnings of people not reporting crime, we should all be concerned,” Acevedo said.

For many, Ray-Jones says, being separated from kids, family and a country they consider home poses a greater risk than staying in an abusive situation. But Trump Administration officials have argued that the fear of violent undocumented criminals is greater. “The media like to talk about separating families,” Trump said at the recent rally in Iowa. “But the families they never talk about are the American families separated forever from the ones they love because we don’t protect our borders and uphold the immigration laws of the United States.”

Pedro Rios, who works for a Quaker-based social-justice organization called the American Friends Service Committee in San Diego, started traveling around areas near the California-Mexico border after the election, trying to help immigrants prepare for possible raids. He has often been approached by people asking for advice, like a woman who asked him whether her husband’s decade-old DUI conviction would bring enforcement agents to their home. “‘Should I move? Should I change homes? Should I change jobs?'” he recalls her wondering. “Unfortunately there’s a lot of people who are living in this state of constant fear.”

–With reporting by KATY STEINMETZ/SAN DIEGO 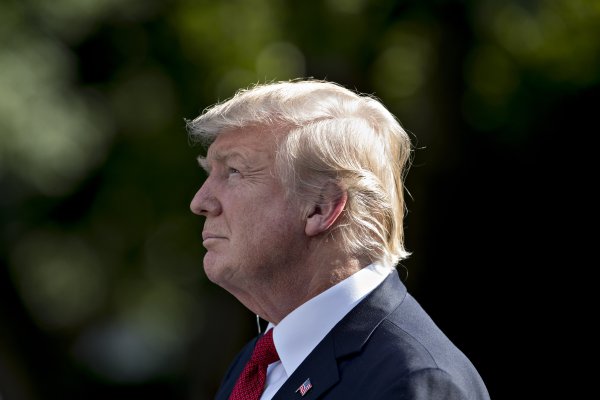 Trump Calls on Congress to Pass Bills Aimed at Undocumented Immigrants
Next Up: Editor's Pick