People protest against the recent cases of mob lynching of Muslims who were accused of possessing beef, in New Delhi, India, June 28, 2017.
Cathal McNaughton—Reuters
By Nikhil Kumar / New Delhi

India’s Prime Minister Narendra Modi has spoken out against violence by cow vigilante groups, a day after thousands of Indians gathered in cities across the country on Wednesday evening to protest against a string of attacks on minority Muslims that have sparked concern about the fraying of India’s secular fabric.

Speaking at a public event in western Gujarat state, Modi said that “killing people in the name of [cow worship] is not acceptable.” “No person in this nation has the right to take the law in his or her own hands,” he added on Thursday.

Modi’s remarks came after protestors in several places, including the capital New Delhi, India’s commercial hub Mumbai and the eastern city of Kolkata, came out on Wednesday evening in response to a Facebook post calling on ordinary Indians to raise their voice against the fatal stabbing of a Muslim teenager on a moving train by mob of about 20 Hindu men. Junaid Khan was killed, reports say, when an argument over seats spiraled into a mob accusing the 15 year old and his three companions of eating beef, which is considered sacrilegious by many Hindus.

“It doesn’t make sense what’s happening, that you just kill someone based on a rumor or because of a preference. I have no words for it,” says Siddhant Sarkar, a 25-year-old student who joined the protest in Delhi. “We can’t stay silent about it.”

Junaid’s killing was the latest in a series of attacks aimed mostly at members of India’s minority Muslim community in recent years, as cow vigilante groups feel emboldened under the rule of Modi’s Hindu nationalist Bharatiya Janata Party (BJP). Members of the lower caste Dalit community, many of whom consume beef as a staple, have also been targeted by Hindu mobs.

The issue first hit the headlines when Mohammad Akhlaq, a 52-year-old Muslim man in a village close to Delhi, was lynched by a mob in 2015, as rumors spread that he had eaten beef and was storing cow meat at home.

Cow slaughter has long been outlawed in several Indian states.

“We are laying our claim as Indian citizens upon this country … we are outraged at the attacks on human life, human dignity … at the systemic violence unleashed on Dalits and minorities,” filmmaker Saba Dewan, whose Facebook post sparked the protests, told the local Hindustan Times newspaper. “This is not the India we want.”

Read More: An Angry Mob In India Lynched a Muslim Man Because They Thought He Had Eaten Beef

Earlier this month, Amnesty International said at least 10 Muslim men had been lynched or killed in public in Hindu majority India amid what it called a “rising tide of Islamophobia in the country.”

“The pattern of hate crimes committed against Muslims with seeming impunity — many of them in states where the Bharatiya Janata Party is in power — is deeply worrying. Unfortunately both the Prime Minister and various Chief Ministers have done little to show that they disapprove of this violence,” said Aakar Patel, the group’s executive director for India.

Modi, who cultivates an image of himself as an economic reformer, has spoken out against vigilante groups once before, when an incident of cow-related violence against Dalits last year threatened to affect his political party’s electoral prospects.

But the government has otherwise been largely been silent on the issue, which plays well with hardliners among its Hindu nationalist base. In April, following the killing of a Muslim dairy farmer by a Hindu mob in BJP-ruled Rajasthan state, a ruling party politician said: “We have no regret over his death because those who are cow-smugglers are cow-killers, sinners like them have met this fate earlier and will continue to do so.”

Pratap Bhanu Mehta, a prominent Indian public intellectual, says the violent attacks on minorities mark the unfolding of “a monstrous new moral order… irrigated by the blood of our citizens.”

“A big riot would concentrate the mind, make a damning headline,” he wrote in the local Indian Express newspaper. “A protracted riot in slow motion, individual victims across different states, simply makes this appear another daily routine.” 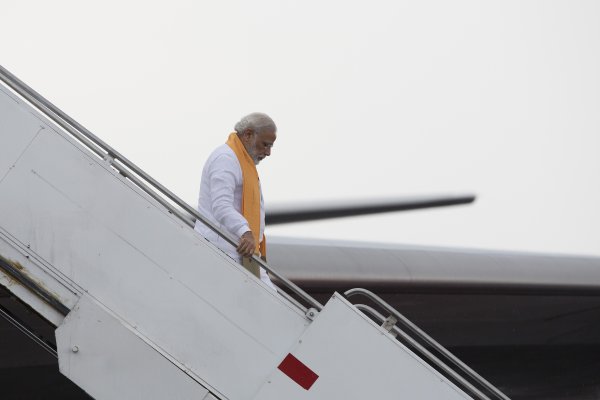 Narendra Modi to Meet Donald Trump at the White House
Next Up: Editor's Pick