Chinese President Xi Jinping arrived in Hong Kong Thursday for a three-day visit — his first since assuming China’s top job in 2012 — as the former British colony prepares to mark 20 years since the resumption of Chinese sovereignty.

Greeted by the city’s unpopular top official, Chief Executive Leung Chun-ying, and Leung’s successor Carrie Lam, as well as dozens of primary school students in red caps, Xi delivered brief, anodyne remarks after landing just before noon local time at Hong Kong International Airport. He said the aims of his trip were to show Beijing’s support for the semi-autonomous territory, and to help plan for its future.

“The Central People’s Government has always given Hong Kong Special Administrative Region its strong backing,” Xi added said. “We will support development and livelihood improvement in Hong Kong, as always.”

He also mentioned the “one country, two systems” arrangement — under which Hong Kong’s freewheeling capitalist economy, independent judiciary, as well as its many freedoms, are supposed to be maintained till at least 2047.

“Together with all sectors of Hong Kong, we would like to look back at the extraordinary journey of the past 20 years, sum up what we’ve learned, and look to the future to ensure that ‘one country, two systems’ can [remain] stable and go far,” Xi said.

After the address, he left in a government sedan without taking questions from journalists on the tarmac. One question pertained to Liu Xiaobo, the dissident and Nobel Peace Prize laureate who has been diagnosed with terminal liver cancer.

Xi’s visit comes at a contentious moment, as Hong Kong grapples with its sense of identity and role within China. Many in the territory, particularly the younger generation, do not view themselves as Chinese but as Hongkongers, and regard Beijing as an alien power bent on eroding Hong Kong’s precious freedoms. There have been calls for self-determination and even independence. In 2014, the city was rocked by months of massive street protests — dubbed the Umbrella Revolution — as tens of thousands of demonstrators called for greater political freedom.

The Hong Kong National Party vowed to go ahead with a rally Friday to “mourn the 20th anniversary of the fall of Hong Kong,” despite official warnings.

Two protests have also been staged at Golden Bauhinia Square, next to the Hong Kong Convention and Exhibition Center, where Lam is expected to be sworn in on Saturday. The square houses a tall sculpture of a stylized Bauhinia blakeana, Hong Kong’s official flower — a gift given by Beijing in 1997.

Police took them away on grounds of “public nuisance.” Six members of the group had to be hauled away using a fire truck ladder.

According to a statement Thursday on Wong’s Facebook page, police had yet to take his testimony after overnight detention. “I’m extremely discontented with the arrangement and believe it’s deliberately made to delay time, stopping more protests from erupting,” he stated.

In anticipation of Xi’s visit, local police have put Hong Kong on lockdown, deploying over 10,000 officers to guard against protests and demonstrations. 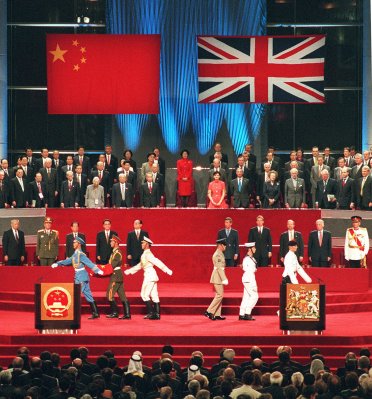 Hong Kong: A Photographic Timeline of Highs and Lows
Next Up: Editor's Pick