U.S. Ambassador to the United Nations Nikki Haley has sparked online furore over a tweet praising cuts made by the Trump administration to the organization’s peacekeeping budget.

Haley tweeted Wednesday: “Just 5 months into our time here, we’ve cut over half a billion $$$ from the UN peacekeeping budget & we’re only getting started.”

In a subcommittee hearing Tuesday, Haley said that the U.S. is aiming to cut the country’s contribution to the peacekeeping budget to 25% of total costs from its current level of 28.5%, Bloomberg reports. “I have seen value in the U.N.,” the ambassador said, “and at the same time the U.N. has fat around the edges.”

The Associated Press reports that the U.S. currently pays 22% of the U.N.’s operating budget, and that the Trump administration’s proposed budget seeks to cut contributions to international organizations including the U.N. by 31%.

The tweet garnered a wave of responses from users on social media, with some criticizing Haley’s tone as appearing congratulatory of the budget cuts.

Haley’s comment comes as Republican figures voiced their concerns over the effect that proposed cuts to the U.N. could have on the America’s global standing, Bloomberg reports. “Some of these cuts are massive and just devastating,” Texas Rep. Kay Granger said at Tuesday’s hearing. The ambassador’s tweet also followed a visit by the U.N.’s Secretary-General Antonio Guterres to Washington to lobby against the funding cutbacks, according to the AP. 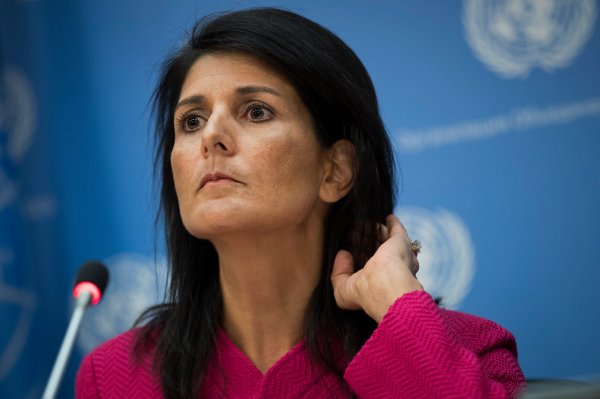 U.S. May Withdraw from the U.N. Human Rights Council
Next Up: Editor's Pick