Kelly Cuvar has been fighting cancer for the past 18 years. But the more time-consuming battle, she says, is not fighting her condition, but keeping her health insurance. “I can’t believe I have to fight for this again,” Cuvar said.

Cuvar was among the throng of people that stood outside the Trump International Hotel Wednesday afternoon to protest the proposed Senate health care bill and the $35,000 to $100,000-a-ticket fundraiser for President Donald Trump’s re-election campaign that was going on inside.

“It’s insane,” said Andraea LaVant, 34, who suffers from muscular dystrophy and relies on Medicaid for her insurance. “One of these tickets could pay for my entire health care for one year.”

When Trump’s motorcade arrived at his family hotel – which is just blocks away from the White House – he was greeted with boos and shouts of “shame!” from the crowd outside. Many of the protesters, which totaled no more than a few hundred, said they wanted to send a message to the president to not support the health care bill.

“I have spent more time worrying about obtaining and maintaining health insurance coverage than I have working on getting well,” added Cuvar, 37, who requires medication that would cost $72,000 out of pocket. “This is a daily concern for me. My life was saved by Medicaid. This bill would mean very terrible things for me in the future.”

Others ranted about the price tag of the event that will help fund several Trump fundraising operations including Trump Victory and the Trump Make America Great Again Committee. Combined, they raked in $9.9 million in the first three months of this year, according to Federal Election Commission reports.

“I knew that xenophobia, racism, and misogyny was expected but I didn’t know it would cost $35,000 a plate,” said Michael Delvone, the Washington, D.C. director for Working Families, an advocacy group and grassroots political organization. “Twenty-two million people stand to lose their health care and these folks are in there dining on caviar and lobster.”

Earlier Wednesday, Trump told reporters that people should expect a “big surprise” on health care, but did not elaborate on what he meant. The president has gone back and forth in his support for the Republican-led Obamacare repeal legislation. He celebrated the passing of the House health care bill in May, only later to call it “mean.”

David Barrows, 69, showed up early to the protest wearing a “Dump Trump” hat, a medical gown, and fake, exposed buttocks. “With Trumpcare you won’t be covered,” read the sign on his back. Barrows says he is a seasoned protester, and owns multiple costumes poking fun at the president.

“We got to protest this fake Trump care which is really a tax break,” said Barrows, who is retired but used to work as an office manager. “People would die from this. You’ve heard of vulture capitalism – this is vampire capitalism because it really feeds on people who are going to die. It’s an example of the extremely rich not caring about the lives of the poor.” 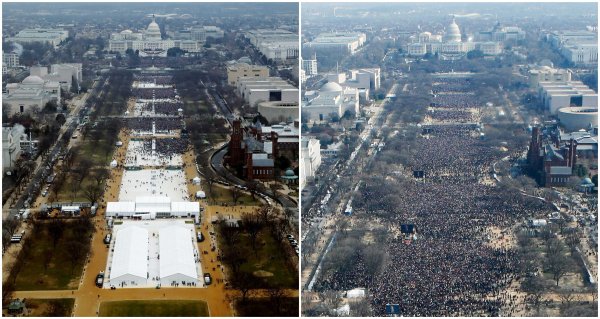 No, The National Park Service Didn't Alter Photos of Trump's Inauguration Crowd
Next Up: Editor's Pick