Tom Holland Was Born to Be Spider-Man. Playing Peter Parker Was Another Story

It takes a special superhero to merit a third film reboot in 15 years. Then again, Spider-Man has always been more sympathetic than his peers. Neither billionaire (Tony Stark in Iron Man) nor genius (Dr. Bruce Banner in Hulk) nor god (Thor in Thor), Peter Parker is just a stressed-out, nerdy teenager who happened to be bitten by a radioactive spider. “It’s not so easy to relate to Tony Stark,” says Tom Holland, the young British actor who plays Parker this time. “But everyone’s gotten tongue-tied around a crush.”

That’s exactly what happens to Spidey in the new film, Spider-Man: Homecoming, out July 7. After Peter saves the girl he like likes from plummeting to her death (Laura Harrier as a fellow student, Liz), the Siri-esque voice in his high-tech suit encourages him to kiss her as he hangs upside down, an homage to the famous smooch in Sam Raimi’s 2002 Spider-Man. This time, though, when the hero leans in, the thread suspending him snaps.

The film’s title, “homecoming,” indicates a return to the original comic-book conceit that Parker is plagued by teenage awkwardness and thus all the more charming. The baddie, too, is less operatic: Michael Keaton plays a more or less regular guy who turned super-villain.

To help capture the right feeling, director Jon Watts asked Holland to study John Hughes movies like Ferris Bueller’s Day Off and The Breakfast Club. It didn’t hurt that Holland — who made his debut as Spidey in last year’s Captain America: Civil War — is still young. (He turned 21 in June.) Tobey Maguire was 26 when his first Spider-Man movie premiered; Andrew Garfield was 28.

MORE: What Happens to Spider-Man After Homecoming

Not that Holland is a novice. Born to a creative family — his mother is a photographer, his dad a stand-up comedian — he excelled in gymnastics and ballet as a child. From 11 to 13 he starred in Billy Elliot, the musical about a kid who trades boxing gloves for ballet shoes, in London’s West End. Like Billy, Holland often found himself defending his dance career. “I got a lot of grief when I was in school about doing ballet. It wasn’t as cool as being a rugby player,” he says. “But I loved it, and it’s what put me on the map.”

Holland’s Instagram feed is littered with videos of leaps and backflips. Those acrobatic skills will serve him well in a planned Homecoming sequel, in next year’s Avengers: Infinity War and as gravity-defying treasure hunter Nathan Drake in a future film adaptation of the popular Uncharted video-game series.

Holland recently showed off his dancing chops on an episode of Lip Sync Battle, dressing in drag to perform Rihanna’s “Umbrella.” These days superheroes tend to be the epitome of manliness, all rippling muscle, gruff voices and knockout punches. So Spidey donning a corset and wig to gyrate onstage is no small subversion. The video went viral.

The superhero’s impossible leaps were no problem. The hardest part of playing Spider-Man, Holland says, was transforming into a kid from Queens. Holland didn’t know the first thing about American schools and joked with producers that he ought to attend one. But to studios, superhero franchises are no laughing matter, so they sent him undercover to the highly competitive Bronx High School of Science in New York City for three days.

Teachers who thought he was a real student peppered him with questions about astrophysics and calculus. “It’s a school for genius kids, and I’m no such genius,” he says. But it was a student, not an instructor, who got the closest to uncovering Holland’s secret identity. Suspecting that something was amiss with this older-looking kid who had transferred midyear, she asked Holland, “Dude, What’s your deal?”

She rolled her eyes. 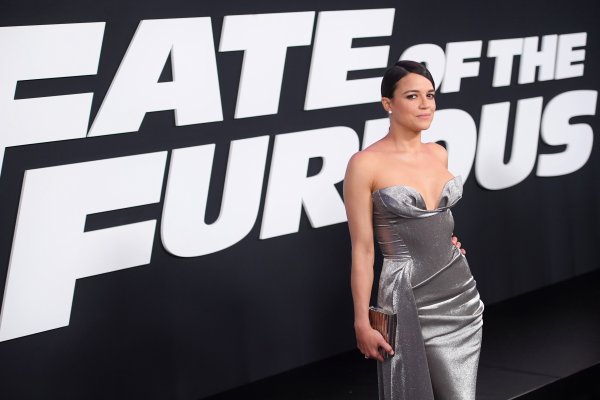 Michelle Rodriguez Warns She Might Quit 'Fast and Furious'
Next Up: Editor's Pick