Reality tv starlets and professional cool teens Kendall and Kylie Jenner are catching heat for the latest offering from their eponymous clothing line, Kendall + Kylie, a collection of modified “vintage” band tees. The shirts are repurposed vintage band and rap t-shirts (or if you will, their preferred slogan for the capsule, “Rock vs. Rap”) that are emblazoned with Kendall and Kylie’s touch.

The personalization includes the K.K. initials, Kendall’s superimposed face, and a silkscreen reproduction of an Instagram of Kylie in a bikini over images of Biggie and Tupac, Metallica, and Pink Floyd. According to CR Fashion Book, the t-shirts are a limited edition capsule collection that will sell for $125 a shirt.

Some felt that the sisters were disrespecting the legacy of rappers Biggie and Tupac.

While others felt that the Jenner girls had no place remixing shirts depicting rock icons.

However, some fans were more enthused.

Update: Both Kendall and Kylie Jenner posted a statement to their personal Twitter accounts apologizing to “anyone who has been upset and/or offended, especially to the families of the artists.” The statement also noted that shirts had been pulled from retail and that all images of it were removed. 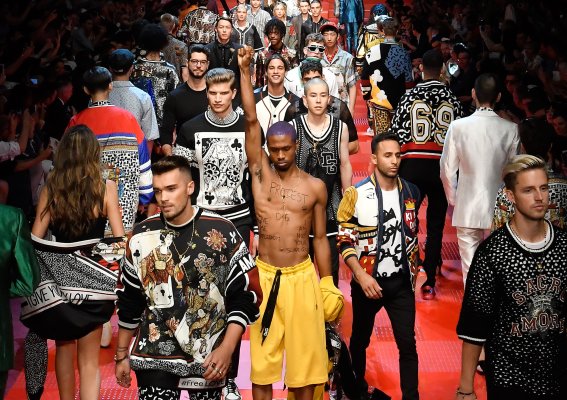 Why This Singer-Model Staged a Protest of Dolce & Gabbana Right on the Brand's Runway
Next Up: Editor's Pick