Inside Tinder: Meet the Guys Who Turned Dating Into an Addiction

Tinder, a wildly popular mobile dating app, has in just 17 months, become something of a cultural phenomenon. Its obsessed user base, made up mostly of 18-24 year-olds, has grown by a million in the last sixty days alone. The startup’s success earned two of its 27-year-old co-founders, Sean Rad and Justin Mateen, spots on the Forbes 2013 “30 Under 30” list.

We spoke to Rad and Mateen by phone from their Los Angeles headquarters for this week’s magazine feature about the future of dating in a digital world, “The New Dating Game.” When asked about how they came up with the blockbuster idea, the pair had a surprisingly unscripted answer:

“Here’s how it started,” said Rad by phone. “Justin needed help meeting people because he had, what’s that disorder you have where you don’t leave the house?”

Without skipping a beat, Mateen pushed back against the accusation of agoraphobia with a sophomoric rebuttal that Rad, also Tinder’s CEO, quickly cut off — “We’re joking, we’re joking” — to steer the conversation back to talking points about Tinder, which has become a prominent part of the cultural lexicon.

For the uninitiated, Tinder is a smartphone app that at first seems like a higher tech version “hot or not.” Users are shown photos of nearby potential matches and can swipe right to “like” and left for “nope.” Mutual right swipes result in a match, followed by the prompt to either send a message or “keep playing.” This “Keep playing! Keep playing!” mantra has led to an epidemic of 500 million swipes (and 5 million matches) a day.

It has also revolutionized the technology-assisted matchmaking process. While traditional dating sites require extended periods of time in front of the desktop writing and browsing long bios, Tinder can be played in short bursts on the go. It also values efficiency (and this generation’s comfort with releasing personal information online) by importing profile information directly from Facebook including name, age, interests, and most importantly mutual friends. And thus, romance has become a second screen experience.

Although the pair crossed paths when they were in private high schools in Los Angeles, their story begins first semester freshman year at University of Southern California in 2004. “Our eyes locked in a math class,” Rad jokes. Essentially, they both swiped right. (For professional purposes, that is.) The two were both working on their own side businesses, so they decided to join forces and switch off homework duty, letting the other copy off problem sets.

Rad is also responsible for introducing Mateen, who had been a BBMing Blackberry loyalist, to the iPhone.

“I got one the next day,” Mateen said. “Sean said it would literally change my life.”

And it did. Tinder only exists on smartphones and its photo-driven design was created for Apple’s iOS format, although it later became available on Android. “Computers are going extinct, and I thought mobile is the future,” Rad said. “I wanted to build platforms through there.

Mateen is what they describe as the “social butterfly” of the operation. Less than five minutes into our conversation, he asked for my last name (I also grew up in Los Angeles) and soon announced, “we have nine mutual friends on Facebook.”

Rad is unsurprised. “The entire planet is connected by at least three degrees to Justin.”

Mateen was in a frat at USC and helped leverage the Greek system for early growth. “We knew that if it were to resonate with college kids who were already in a very socially charged environment, that other people would find value in the product as well,” he said. “We knew college kids would be the hardest to get on board and that’s one of the reasons why we seeded it on college campuses.”

In the beginning, 90% of Tinder users were between the ages of 18 and 24. After 17 months of growth, Tinder’s college-aged users are at just over 50% and other demographics have expanded. (There’s also a surprising 7% base between 13 and 17, although Mateen assures that they are only visible to one another.)

Rad, and the third founder, Jonathan Badeen, with whom Rad connected with at a tech incubator, focus more on product and user experience. Although Rad admits that they can all bicker — “All the time! Although I wouldn’t call it bickering, I’d call it debating… actually I wouldn’t call it a debate, rather a collaboration” — about things ranging from from icon placements to the matching algorithm, it’s clear that they all eat, sleep, dream the job. And sometimes it takes a toll.

“I personally gained 10 to 15 pounds this year, but I’m working to lose that now,” Mateen said. “We don’t have time to go to work out. I have a really strong thumb, though.”

What have the game-makers planned next?

The Tinder founders’ biggest trick was to turn the app into a game that you would want to play even if you weren’t looking for a date.

“We always saw Tinder, the interface, as a game,” Rad said. “What you’re doing, the motion, the reaction.” So Rad and Badeen modeled the original stack of potential matches’ faces after a deck of cards. When playing with physical cards for inspiration, their natural urge was to interact with the top card by throwing it to the side. Thus, the iconic Tinder swipe was born.

“Nobody joins Tinder because they’re looking for something,” Rad said. “They join because they want to have fun. It doesn’t even matter if you match because swiping is so fun.”

Although, let’s face it, no matter how casually single people approach Tinder, part of its draw is a latent hope for romantic connection. And the Tinder founders lead by example. Rad might use Tinder to hire employees, but it’s also how he found his serious girlfriend. Mateen credits Tinder for a serious relationship with someone he already knew but, “Tinder provided a different context for us because we hadn’t talked one-on-one.”

And future plans involve creating ways to help people get to know the people they have been matched with better. “Right now you can only text message with them, but after some time it gets scaled [back],” Mateen said. “It gets awkward and you can’t approach them easily. We’ll be adding new features to let you engage with them further in a light-weight manner.”

Even though Tinder is seen in the dating context today, Rad and Mateen explicitly want it to evolve to be about social discovery and meeting people other than in a romantic context. “You’ll be able to eventually interact with friends for other purposes,” Mateen said. “So even if you’re in a relationship you’re gong to be able to find good value in Tinder in the coming months.”

After all, with new dating platforms regularly proliferating the app store, Tinder needs to keep the fire burning.

Join TIME for as little as $2.99 to read Laura Stampler’s story, “The New Dating Game.” 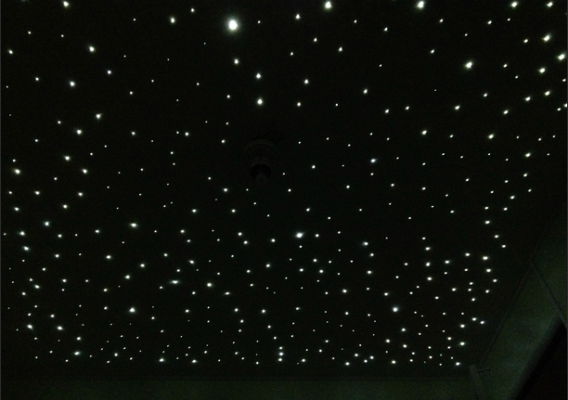 Man Builds Awesome Star Ceiling for His Unborn Son
Next Up: Editor's Pick