Is Time Running Out On Health Care?

Senate Majority Leader Mitch McConnell pulled the Senate Republican healthcare bill from a planned vote this week, as a long list of GOP lawmakers remain uncomfortable with the plan. After a meeting at the White House Tuesday with 46 GOP Senators and President Trump, McConnell issued a warning that time is running out for Republicans to unilaterally act on health care, and that if his push is unsuccessful that the GOP will have to work with Democrats to tinker with Obamacare later this year. McConnell faces defections on both wings of his caucus—and prospects for a compromise that doesn’t result in losing critical votes remain slim. The Senate isn’t the House, where leadership has more ability to steamroll members and lawmakers are less independent, and it is difficult to see how delay will make Republican consensus any easier to find. Trump called his meeting with the GOP lawmakers “impressive,” but his positive thinking may not help him this time.

Can Mitch McConnell Save the Republican Health Care Bill?
One of Washington’s unwritten rules is facing its stiffest test [TIME]

McConnell Once Praised ‘Slow and Steady Deliberation.’
Why is he discarding that now? [Yahoo]

“They’re a budget office. And I think on the initial numbers that we saw, from that, — the cutting of the deficit, the cutting of taxes — I think that that’s where historically they’ve been more accurate as well. It’s not just my — like I’ve decided that. But historically, that’s where they’ve been.” — White House Principal Deputy Press Secretary Sarah Sanders explaining why the Administration doesn’t trust the Congressional Budget Office’s estimates on healthcare

“Well, you know, we’ve made no decisions at DOE, nor has this administration, from the standpoint of where we’re going to look. Obviously, those are all options but there’s been no decision made about where it will be going.” — Energy Secretary Rick Perry on the Yucca Mountain Nuclear Waste Repository, which receives additional funding in the Trump budget proposal

A Time magazine with Trump on the cover hangs in his golf clubs. It’s fake. [Washington Post] 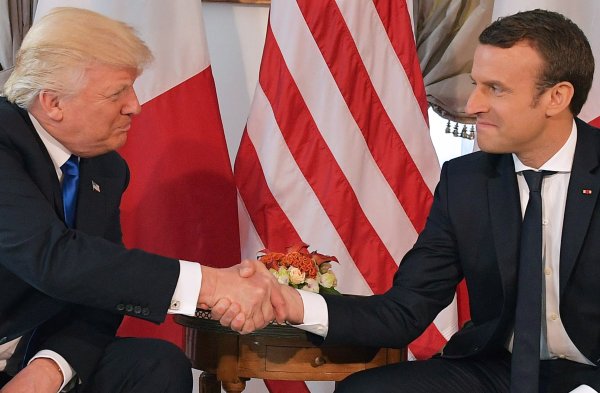