An Autosub called Boaty McBoatface is winched prior to the keel-laying ceremony of the new polar research ship for Britain, RRS Sir David Attenborough, which is named after him, at Cammell Laird shipyard, on October 17, 2016 in Birkenhead, England.
Christopher Furlong—Getty Images
By Alana Abramson

The robotic submarine Boaty McBoatface successfully completed its first voyage in a region of the Southern Ocean roughly 500 miles from the Antarctic Peninsula.

The sub went as deep as 4,000 meters — more than 13,000 feet — and obtained data that can help scientists understand the impact of mixing ocean waters on climate change, the Guardian reports.

The submarine is part of a research vessel named RRS Sir David Attenborough, after the English broadcaster. The vessel began its journey in the middle of March, starting in Antarctica before continuing on to the Southern Ocean. It is part of Europe’s National Marine Equipment pool.

The vessel drew international attention in 2016 when the United Kingdom conducted a government online poll to determine its name. Boaty McBoatface was the most popular choice, amassing 124, 000 votes. The government decided to name the vessel RRS Sir David Attenborough, much to the chagrin of Boaty Mcboatface supporters. As a consolation prize, the government gave that name to the vessel’s robotic submarine. 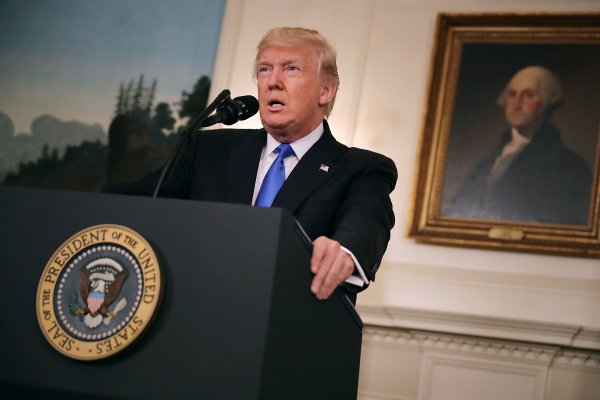 Trump's Chemical Weapons Warning Raises the Stakes for War in Syria
Next Up: Editor's Pick