'It Really Pisses Me Off.' Britney Spears Thinks Those Lip-Sync Rumors Are Toxic

Britney Spears is well aware of all the lip-sync claims slung her way over the years, and she’s over it.

In a new interview with an Israeli TV show prior to her performance in Tel Aviv on July 3, the pop diva did not hold back her thoughts.

“I’m glad you’re addressing this question because it’s really funny,” she said when a reporter asked how much of her Piece of Me tour concerts are live. “A lot of people think that I don’t sing live. I usually, because I’m dancing so much, I do have a little bit of playback, but there’s a mixture of my voice and the playback. It really pisses me off because I am busting my ass out there and singing at the same time and nobody ever really gives me credit for it, you know?”

Watch a clip from the interview below.

One of the more widely known instances of these allegations, of course, was the media “Circus” erupting over Spears’ infamous performance of “Gimme More” at the MTV VMAs in 2007.

Her latest comments on the matter come shortly after she was accused of lip-syncing during a performance on her pitstop in Japan, where video seemed to show her mouth out of sync with the words of the song after a microphone slip.

Similar claims persisted through her successful residency in Las Vegas. Her manager, Adam Leber, told Medium in 2014, “To put on the show that she puts on, it’s virtually impossible to sing the entire time and do what she does. She’s singing on every song, basically, when she has the ability to sing. There’s no way you can dance for 90 minutes straight and sing the entire time.” 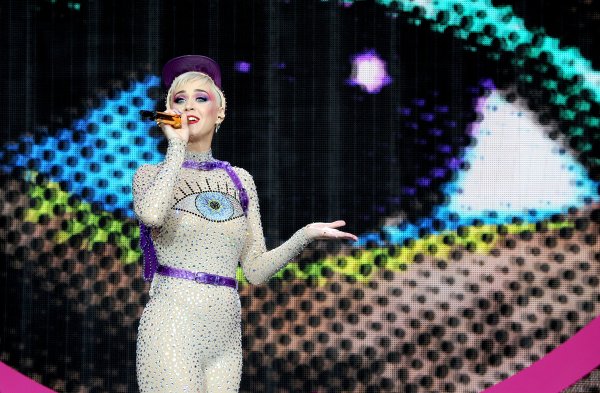 Katy Perry Frolics In a Psychedelic Garden In "Feels" Video
Next Up: Editor's Pick