The World-Saving Reason Men Should Wear Shorts to Work

Recently at my office, I saw a man wearing shorts, and I felt an animal anger — like a bull that had seen red or a duck that had seen another duck lying in bed with his duck-spouse. But as I walked away, I struggled to locate the specific source of my rage. While I’ve long disliked shorts, with just a little self-reflection my righteousness wilted. Why, exactly, did I care so deeply about men wearing shorts to work?

The same afternoon I found myself siding with the British schoolboys who successfully protested their academy’s anti-shorts dress code by wearing skirts to class during a heatwave that saw temperatures near 90 degrees. In France this summer, bus drivers made the exact same demonstration.

Similar protests have been made for decades, and they have largely focused on comfort and fairness. Former Supreme Court nominee Merrick Garland himself once successfully dissented against his high school’s rule against shorts to un-air-conditioned final exams; as his nomination progressed decades later, his win was held up as a symbol of his lifelong judiciousness. But unravel the cultural aversion to shorts even further, and you find a hollow hang-up with an unlikely urgency — in a time when heat waves are increasingly common, shorts may have more significance than we realize.

The age-old reason men can’t wear shorts in formal settings is because it makes them look like children. But if you interrogate that causality — Why are shorts childish? Because only children wear them. Sure, but why do only children wear shorts? — you arrive at a strange tradition still lingering in our psyche.

Until the twentieth century, pants literally symbolized adulthood. So much so that many American families hosted breeching ceremonies during which boys, after years of wearing dresses and skirts, put on shorts. Only later would they receive their first gift of long trousers, thus ascending into manhood — to work, to accountability.

This began to change through the first half of the twentieth century. According to Susan Scafidi, founder and director of the Fashion Law Institute at Fordham, the strictness of pants protocol began to falter in part because of the advent of air conditioning. It seems the cool indoor climes made long pants comfortable everywhere, and so, especially if a boy was toilet-trained, they could be worn just as easily by a kid well before he merited any particular responsibility. The knee (or ankle) no longer marked a male’s standing.

Male students at the Isca Academy in Exeter, England, wear skirts in protest of the school's shorts ban on June 22, 2017.
Youtube

Through and beyond the mid-century, men wearing shorts gained in popularity and acceptance, but never breached office-level respectability, even as the notion of literal big-boy pants faded. Why? Again, consider the air-conditioner. The American businessman works in offices set to temperatures designated to his body and attire — emphasis on his. As a recent Nature Climate Change report explained, indoor climate regulations were based on an outdated “thermal comfort model that was developed in the 1960s… based on an average male.” The authors detail how the sixties study’s miscalculations on women’s metabolisms “may cause buildings to be intrinsically non-energy-efficient in providing comfort to females,” a problem worsened by the fact that women’s office-wear has nearly always included exposed limbs. In this light, American working men donning suits into the summer come off not as refined, but coddled.

Excessive cooling comes at a cost for not just the businesses paying energy bills. Air-conditioning is self-compounding. Warm temperatures lead people to use air conditioning; air conditioning requires vast amounts of energy and often uses pollutive coolants that raze the ozone; the temperatures get warmer (not just in the long-term but also immediately); people, now accustomed to a certain cool, use more air conditioning — at work, at their home and, in between, their cars or subway trains. This has become particularly true in the United States, which, according to a 2012 report by The Guardian, consumes more energy for A/C than the rest of the world combined.

While worker productivity does seem to drop off if room temperatures surpass the high 70s, Americans often prefer their offices in the low 70s. This is not a natural desire. As has been pointed out time and again, visitors from climate-conscious Europe often complain about the indoor chill blasting through summertime.

Over a decade ago, Japan mandated its government buildings’ temperatures to be approximately 82 degrees in an attempt to decrease air-conditioner usage, and the country has encouraged private companies to follow suit. But to do this, it realized something else would have to change at the same time: dress codes. In 2011, when the program expanded after an earthquake and subsequent tsunami destroyed the Fukushima nuclear power plant, the government permitted polo shirts and trainers, even sandals (sometimes). The government went as far as suggesting men wear slim-cut trousers that fell only as far as the calf. Japan redefined style through necessity, and proved truncated pants can become businesswear.

So, American companies that pay to keep their workplaces cooler than necessary — at least in part to allow their male staff to maintain a traditionally “mature” business aesthetic — should know that they’re doing so for archaic reasons, which seem especially small in the context of climate change. By comparison, letting in the heat and abandoning the last vestiges of an anti-shorts culture actually seems pretty cool. 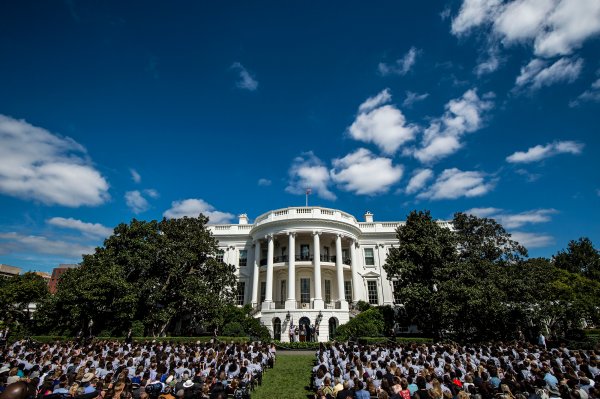 Stanley McChrystal: Every American Should Serve For One Year
Next Up: Editor's Pick