Senate Delays Health Care Vote Due to Lack of Support

The Senate will push off a vote on its health care bill until after the July 4 recess, amid mounting signs of trouble for the Obamacare repeal effort, according to senior lawmakers.

The Better Care Reconciliation Act had been slated for a vote this week, but a number of Republican senators have expressed reservations about the bill in its current form.

In a meeting with Vice President Mike Pence Tuesday, Senate Majority Leader Mitch McConnell said the vote would be delayed, according to senior lawmakers who were present at the meeting.

“We’re gonna continue the discussions within our conference, on the differences that we have and that we continue to try and litigate,” McConnell said in brief remarks to reporters Tuesday afternoon, highlighting the complex nature of the legislation. “Consequently, we will not vote on the bill this week.”

Because Republican leaders hope to pass the bill using reconciliation, a budget procedure that allows a simple majority vote, they can afford to lose only two of their own members on the vote. But several senators said they could not back the bill yet: Kentucky Sen. Rand Paul, Maine Sen. Susan Collins, Utah Sen. Mike Lee, Alaska Sen. Lisa Murkowski and Wisconsin Sen. Ron Johnson.

The Senate health care bill would leave 22 million fewer people with insurance and reduce the federal deficit by $321 billion by 2026, according to the nonpartisan Congressional Budget Office.

It remains to be seen what changes, if any, will be made to the bill before the Senate votes on it. Some Senators in the chamber want a complete repeal of Obamacare and said the bill didn’t go far enough, while moderate Senators said it didn’t do enough.

“While the scheduling may have slipped a little bit we are intent on rescuing Americans from a failed system,” said Sen. John Thune, the Senate Republican Conference chair.

Senate Democrats were clearly pleased with the development, but seemed well aware their work wasn’t finished.

“We are not resting on any laurels nor do we feel any sense of accomplishment,” said Senate Minority Leader Chuck Schumer.

Write to Philip Elliott at philip.elliott@time.com and Alana Abramson at Alana.Abramson@time.com. 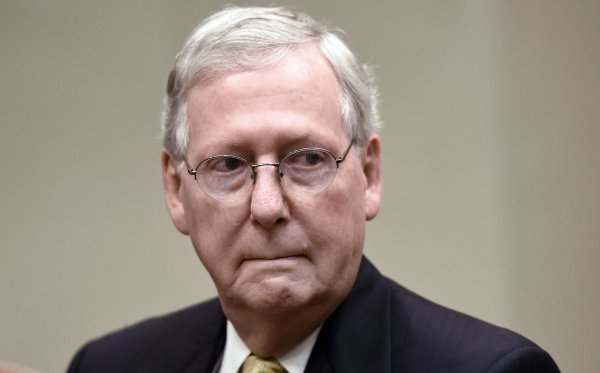 Health Bill Would Result in 22 Million Uninsured
Next Up: Editor's Pick